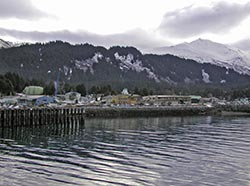 Arriving in Seldovia by ferry.

This 19-mile route crosses outer Kachemak Bay. One of the richest marine bodies in the world, this bay is protected as a Marine Reserve. The bay’s big tides mix and swirl glacial runoff with deep ocean water, while incoming and circulating currents concentrate plankton, creating a rich marine ecosystem of invertebrates, crabs, forage and bottom fish, marine mammals and vast flocks of birds. Whether on an Alaska Marine Highway ferry or a private tour, you can see diving seabirds such as common murres, pigeon guillemots and puffins, sometimes just off the boat rails. Watch for concentrations of active gulls—they may indicate schools of forage fish or krill that can also be the targets of feeding whales. Humpback whales are often sighted when they exhale and produce a white “blow” visible as a brief puff of fog across miles of sea. Harbor seals and Steller sea lions regularly forage in the area. Dozens of sea otters may be glimpsed in large groups off Seldovia and the Herring Islands.

This route crosses rich, relatively shallow marine waters of outer Kachemak Bay and offers an excellent glimpse of the ocean ecosystem found throughout the Gulf of Alaska.

In 1993 the state designated 222,000 acres of tidal and submerged lands as critical habitat, and in 1999 the bay’s water and adjacent public lands were designated as a National Estuarine Research Reserve.

Hope for calm weather, but be prepared for rough seas. Bring rain gear and expect wind even on sunny days.

Instead of making Seldovia a day trip, consider staying a night or three. There are plenty of visitor services and wildlife viewing opportunities. Visit www.seldovia.com and www.xyz.net/~seldovia for information.