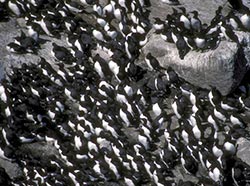 As many as 20,000 seabirds build nests in the craggy rock faces and cliffs of Gull Island, on the south side of Kachemak Bay about three miles from the Homer Spit. Most years, 8,000 to 10,000 black-legged kittiwakes dominate the rookery, building mud nests perched in clefts and on ledges. 5,000 to 8,000 common murres nest amid the kittiwakes. Other birds seen in smaller numbers include glaucous-winged gulls, pelagic cormorants, red-faced cormorants, puffins and pigeon guillemots. The effect stuns the senses—the air is saturated with the odor of fishy guano and vibrates with the cacophony of crying birds. The sky can fill when a thousand birds take wing at once. Watch for the fuzzy offspring peeking from the nests.

Owned by the Seldovia Native Corporation, Gull Island is the most visited seabird rookery in the bay. To protect the wildlife, the Seldovia Native Association does not allow the public to go ashore. The use of cameras for remote viewing of wildlife was pioneered on the island by the Pratt Museum.

Dress in layers for wind and rain.

A variety of tours and operators visit Gull Island throughout the summer. Boat tours crossing Kachemak Bay often include a visit to Gull Island. Ask when making your plans. Homer tours depart from the Small Boat Harbor on the spit. Additional information at www.homeralaska.org or call Homer Visitor Information Center at 907-235-7740.