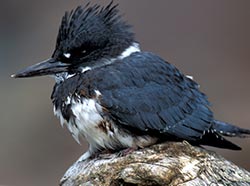 Watch for beavers, river otters and muskrats early or late in the day along quiet stretches of the Anchor River. In spring, migrating shorebirds and waterfowl flock to this area, with many species remaining to nest. Look for mergansers and their broods in the river, and for Pacific golden-plovers, black-bellied plovers and greater and lesser yellowlegs along the river and ocean shores. Bald eagles perch in the cottonwoods overlooking the marsh, and northern harriers glide over the marsh grass searching for prey. Forest birds such as warblers and sparrows search for food along forest edges. Nearly 9,000 Chinook salmon return to the river between May and July, followed by almost 20,000 coho salmon in August. Steelhead trickle in during the fall.

The Anchor River passes through a mixed spruce-cottonwood forest with a lush riparian zone, then emerges into a broad estuary and marsh filled with salt-tolerant sedges and grasses.

English explorer Captain James Cook spent the summer of 1778 sailing Alaska’s coastline in search of a Northwest Passage. The name Anchor Point commemorates the loss of one of his anchors at a point further north.

During fishing season, when the beach and river mouth can get crowded, check out other pullouts and recreation sites along the road.