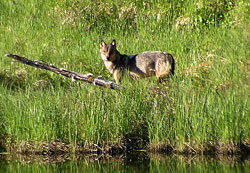 Few creatures embody the wilds of Alaska like the wolf. Silent and tireless hunters, they lope with fluid grace for hours across miles of snow-covered terrrain in search of prey. The wolf once ranged across most of the Northern Hemisphere above the 30th parallel, but its numbers and range have dwindled greatly. Its presence in Alaska is widespread, however, extending across 85 percent of the state. Wolves are most common in Southeast Alaska where their food source, the Sitka black-tailed deer, is abundant. Southeast wolves tend to be darker and smaller than wolves in the rest of the state. In most of Alaska, moose and caribou are their primary food, and wolves supplement their diet in summer with small mammals such as voles, lemmings, ground squirrels, snowshoe hares, and beaver. 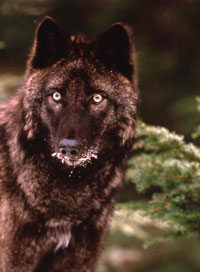 Wolves are highly social animals and usually live in packs that include parents and pups of the year. Pups are often born in a den excavated as much as 10 feet into well-drained soil. Pack size is usually between two and 12 animals but can be up to 30 animals. Wolf packs tend to remain within their territory, which may extend 200 to 1000 square miles. Wolves that depend on migrating caribou for food will travel very long distances when necessary.

Wolves are able to adapt to a wide variety of habitats from the rain forests of the Southeast panhandle to the Arctic tundra along the Beaufort Sea.

Canis lupus can be found throughout mainland Alaska, on Unimak Island in the Aleutians and on all of the major islands in Southeast except Admiralty, Baranof and Chichagof. Densities are lowest along the coast of western and northern Alaska.