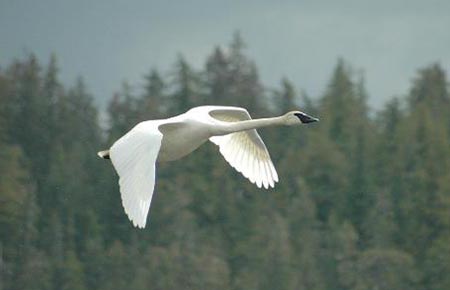 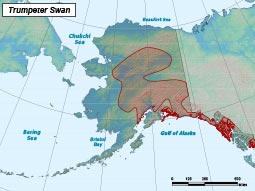 Trumpeter Swans were fairly common throughout most of the northern United States and Canada, but were extirpated from many areas due to market hunting and the millinery trade (feathers for hats) during the 19th century. After protection, source populations in Alaska helped the birds make a comeback.

Like all swans, the sexes have identical plumage, and both tundra and trumpeter swan adults are all white. However, in some Alaska locales, iron-rich marshes stain head and neck feathers a rusty color. Feathers of immature swans are an ash gray color, and some gray feathers remain evident on the heads and necks of swans that are one and two years old. Trumpeter swans have an angular wedge-shaped head profile, with the black of the bill appearing to merge with the eye. Their bills are all black, with a red border on the mandible (lower jaw). One sure way to identify trumpeters is by their deep, French horn-like call, compared to the higher “whoop” of the tundra swan. Males average 28 pounds (12.7 kg) and females average 22 pounds (10.0 kg).

Swans pair with mates for life, usually at two years old, but delay breeding until their third, fourth, or even fifth year. If one of the pair is lost, a new mate will be found before the next breeding season. Because of the lengthy development period for their young, swans begin nesting as early as spring thaw permits. Trumpeters select a nest site typically in an undisturbed marsh adjacent to a small lake. Construction begins by uprooting nearby plants to form a nest mound that may be used year after year. When finished, a trumpeter nest is six to 12 feet in diameter and about one to two feet above water level with a ring of open water surrounding it. The female lays two to seven eggs (average four) over the next five to 12 days. While the trumpeter female (called a “pen”) attends to nesting duties, her mate (the “cob”) defends a territory around the nest. During incubation, the cob begins a wing feather molt which leaves him flightless for about a month. The young, or cygnets, hatch after 31 to 35 days of incubation. For the next 11 to 15 weeks the breeding pair guards their cygnets until they fledge. During this time, the adult female completes her molt. In some years, early freeze-up causes significant losses of young for trumpeter swans. After this critical period in its life, a swan's chances of survival are generally high and their life span is relatively long for birds.

In summer, swans eat foliage, seeds, and tubers of various marsh plants such as horsetail, pondweeds, sedge, bulrush, water milfoil, widgeongrass, and pond lily. During feeding experiments in Montana, adult trumpeters ate more than 20 pounds of moist aquatic vegetation each day! Young cygnets grow rapidly and require a high protein diet of aquatic invertebrates during the first few weeks. Gradually they shift to a vegetable diet similar to that of adults. On staging areas and wintering grounds in the Lower 48 States, tundra and trumpeter swans have learned to feed in agricultural fields, on vegetables, winter wheat, and unharvested grain. In most cases, swans benefit from these rich winter food sources, but conflicts with farmers can arise from roving flocks of swans that can cause significant damage to crops.

Trumpeter swans are migratory birds and fly south when temperatures start to drop in October or November. They may spend the first several weeks in northern states such as North Dakota and Wyoming, and then move farther south to states such as Arizona or Nevada as temperatures continue to drop.

Formerly, the trumpeter swan occupied a breeding range over much of northern North America. Typically, it is a bird of temperate region forests and prairies, always located near a body of water. Due to intense exploitation by market hunters in the Lower 48 States, who sold both the swan's meat and feathers, the trumpeter was considered an endangered species by the early 1900s. Hunting of swans was stopped soon after. By 1932, biologists knew of only 69 trumpeters in the wild (birds in Alaska were not yet known). Trumpeters were first identified in Alaska in 1850 but, surprisingly, it was not until 1954 that breeding trumpeters were discovered in Alaska. An extensive survey of known Alaska breeding habitat was first flown in 1968 when personnel of the U.S. Fish and Wildlife Service counted 2,844 trumpeters. In 1968 trumpeters were taken off the national endangered species list, but they are classified as rare or endangered in some other states. Rangewide surveys have better defined trumpeter breeding areas, generally in the forested zones of Interior and Southcentral Alaska, resulting in better population estimates. The census of 1990 indicated over 13,000 trumpeters in Alaska (over 80 percent of the world's population) and a continuing increase over the past 20 years. Alaska's trumpeter swans winter near coastal waters from Cordova south to the Columbia River in Washington. A large concentration of trumpeters winters on Vancouver Island.

Swans are very sensitive to disturbance and may have an unsuccessful breeding season if high levels of human activity occur near their chosen nesting site.

Wildlife watchers enjoy these large, stately and beautiful birds. In mid-April, just outside Whitehorse, Yukon Territory, thousands of migrating tundra and trumpeter swans mass at M'Clintock Bay and on nearby waters along the Yukon River, drawing hundreds of swan-watchers. In the past, Environment Yukon has hosted a Celebration for Swans at Swan Haven Viewing Centre on M'Clintock Bay. The turnoff is at Km 1441.8 just past the Yukon River Bridge. A short drive down the dirt road brings you to a small subdivision which includes the Viewing Centre. There are spotting scopes, interpretive displays, programs and community events at no charge. Peak time is usually the third week of April.

In most areas, special habitat protection measures are intended to ensure continued use and production by swans. Recently, eggs from Alaskan trumpeter swans have been sent to several midwestern states where restoration programs are establishing nesting swans where they have not been seen in 100 years.