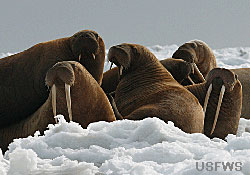 In 2008, the U.S. Fish and Wildlife Service (USFWS) was petitioned to list the Pacific walrus population under the Endangered Species Act (ESA) and to designate areas that are important to walruses as Critical Habitat. In February 2011, the USFWS announced their determination that listing the Pacific walrus under the ESA as threatened or endangered is warranted. However, due to other listing priorities the USFWS did not list the walrus, but designated it as a Candidate species for listing. The primary threats to Pacific walrus identified by the USFWS are loss of sea ice habitat due to climate change, and effects on prey species due to ocean warming and ocean acidification.