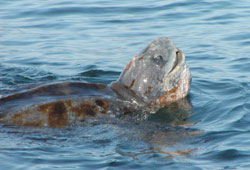 In 1970, leatherback sea turtles were listed as endangered under the Endangered Species Conservation Act, the predecessor to the Endangered Species Act (ESA). When the ESA was passed in 1973, leatherbacks were listed as endangered. In 1978, the US Fish and Wildlife Service designated critical habitat for the leatherback sea turtle on Sandy Point, St. Croix in the US Virgin Islands. In 1979, the National Marine Fisheries Service (NMFS) expanded the critical habitat to include the waters surrounding Sandy Point. In 2007, NMFS completed a 5-year review for the species. Also that year, NMFS received a petition to revise the critical habitat for leatherbacks. In 2010, NMFS proposed expanding the critical habitat designation to include two areas on the US West Coast. One area was off the Washington and Oregon coast. The other was off the California coast.