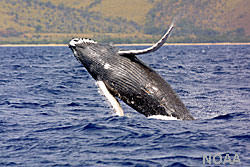 Commercial whaling in the 1800s and early 1900s significantly reduced the global humpback whale population. In 1946, commercial whaling of humpbacks was regulated by the International Convention for the Regulation of Whaling. The International Whaling Commission ended commercial whaling of humpbacks in 1966. In 1970, the humpback whale was listed as endangered under the Endangered Species Conservation Act, the predecessor of the Endangered Species Act (ESA). When the ESA was passed in 1973, the humpback whale was listed as endangered throughout its range. In the same year, it was designated as "depleted" under the Marine Mammal Protection Act (MMPA).

The National Marine Fisheries Service (NMFS) manages species under the MMPA on the basis of "stocks," which are based on the areas in which groups of marine mammals interbreed. The Central North Pacific stock, the principal population of humpback whales in Alaska waters, has increased from a low of approximately 1,400 individuals in 1966 to over 21,000 currently, exceeding recovery goals. Following a range-wide species status review, in 2016 NMFS described 14 Distinct Population Segments (DPSs) of humpback whales. Of those, four DPSs were listed as endangered, including the Western North Pacific DPS, which occurs seasonally in portions of Alaska. The Mexico DPS, which also occurs seasonally in Alaska, was listed as threatened.