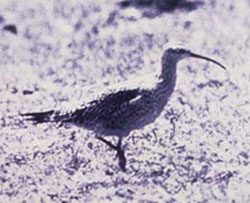 The Eskimo curlew was once one of the most abundant shorebirds in North America, but unrestricted harvest in the late 1800s decimated the population. The concurrent extinction of the Rocky Mountain grasshopper, and important prey species, and loss of habitat due to fire suppression and expansion of agriculture also contributed to the population decline and prevented the recovery of the species following the end of commercial hunting. The species was presumed extinct by 1905 but later sightings revealed that some individuals had survived the harvest. In 1967, the Eskimo curlew was listed as endangered under the Endangered Species Preservation Act. When the Endangered Species Conservation Act, the predecessor to the Endangered Species Act (ESA), was passed, the Eskimo curlew was once again listed as endangered. Then the species was listed as endangered under the ESA in 1973.

The species is considered likely extinct with the last documented sighting in 1962 and the last confirmed sighting in 1987. There are occasional reports of single Eskimo curlew sighted as recently as 1996, but none of these observations have been confirmed.