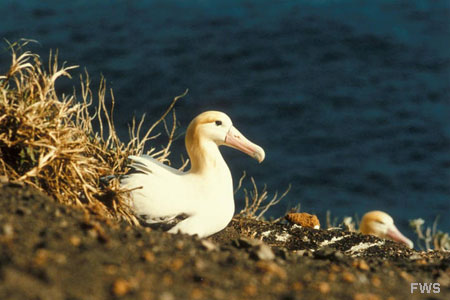 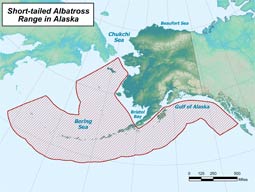 Both the male and the female short-tailed albatross incubate the egg and help rear the young.

The short-tailed albatross is a very large seabird, with a body averaging 36 inches in length, and has long, narrow wings with an average wingspan of 7.5 feet. It has pale blue feet, and a large pink bill with a blue tip. In adult plumage it has a white back with a golden head and black and white wings. In juvenile plumage its feathers are uniformly chocolate brown. In between juvenile and adult plumages, the short-tailed albatross has several sub-adult plumages with a white face and neck and brown body. Full adult plumage is acquired at approximately 12 years of age.

Short-tailed albatrosses generally reach sexual maturity at 6-8 years of age though juveniles may make several trips to the breeding colonies prior to reaching maturity. When short-tailed albatrosses form a pair, they mate for life. They nest on the ground on volcanic ash slopes with sparse vegetation. Pairs will typically return to the same nest year after year.

Breeding begins in late October, and the female lays a single egg. Both parents take turns sitting on the nest, and the egg hatches after about 65 days in December-January. After hatching, the parents feed the chick a mixture of stomach oil and regurgitated food. When the chicks are older, their parents will bring them squid, flying fish, and crustaceans.

Short-tailed albatrosses migrate in the fall. They generally reach the nesting colonies in October. Non-breeding individuals and failed breeding pairs leave the colonies during the winter and spring to range throughout the North Pacific Ocean. Successful breeders will remain in the nesting colonies until May or June. The chicks fledge shortly after their parents leave the breeding grounds.

Once the most common albatross in the North Pacific, the short-tailed albatross was hunted to near extinction in the early 1900s. In the 1930s a volcanic eruption at their single active breeding colony further decimated the population. In 1949, the species was thought to be extinct. However, in 1950, juveniles that had survived at sea returned to their natal colonies and began breeding. Following their dramatic decline, and with the threat of feather hunters removed, the short-tailed albatross appears to be recovering. The population is small but increasing.

One of the main threats to this species is habitat loss. Their main nesting colony is located on an active volcanic island. Previous eruptions have resulted in declines in the population and loss of suitable nesting habitat. The habitat that remains is unstable and more vulnerable to storm disturbance. Further eruptions could worsen the situation.

The short-tailed albatross is also vulnerable to pollution. This species frequently ingests plastic debris. It is also susceptible to contamination from oil spills. The site of one of its nesting colonies has been proposed for future oil development. Its surface feeding behavior and high trophic level puts it at greater risk in the event of a spill.

In the late 1800s and early 1900s, short-tailed albatrosses were hunted for their feathers. The down was used for quilts and pillows. The wing and tail feathers were used for quill pens. The remaining parts were used for fertilizer or fat. The eggs were also taken for food. It is estimated that over 5 million short-tailed albatrosses were clubbed during this time, driving the population to near extinction.

The bones of short-tailed albatross have been discovered in Aleut middens on the Aleutian Islands, indicating that Natives utilized this species as a food source.

ADF&G is not currently conducting research on this species.