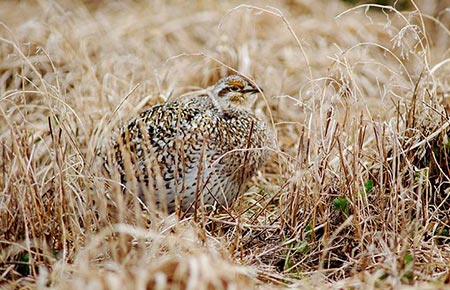 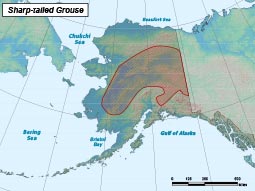 The two sexes look very much alike, except that the central pair of tail feathers of the male is usually striped longitudinally rather than crossbarred as in females.

Distinctive field marks of the sharp-tailed grouse are the short pointed tail and the white spots on the wings. The two sexes can be distinguished by close examination of color patterns on feathers of the tail which are usually striped vertically in males and crossbarred horizontally in females. Their overall color pattern is white with varying shades of brown and gray flecks, with their undersides being lighter. Average weight of these small game birds is about 2 pounds, with males being slightly larger than females.

Courtship displays occur in late April and early May and are performed at dawn on communal dancing grounds called leks. During the displays, cocks produce a hollow booming sound with inflatable air sacs on the neck. The cocks also indulge in much strutting and frenetic dashing about, while the hens wander around the dancing grouse with apparent disinterest. Males may mate with several females, and a hen may mate with more than one male. In late May, hens lay 6 to 15 eggs in a shallow nest on the ground, often far from the lek. In early fall, family groups of sharp-tails gather into flocks. When snow cover persists, the flocks move about a large area. However, males seem to remain quite close to leks in winter.

During Alaska winters sharp-tailed grouse rely heavily on dwarf-birch catkins for food, varying their diet when they can with grass seeds, waste barley, and overwintering berries. In the spring they are often observed ‘budding’ in young aspen trees. At this time they also feed on overwintering berries (especially kinnikinnick) and emerging green leafy vegetation. In summer, green leafy vegetation and insects are important food sources. In years when grasshoppers are abundant, sharptails often feed exclusively on them while they are available. The crops of sharp-tailed grouse taken in September usually hold kinnikinnick berries, lowbush cranberries, blueberries, grains, and various leaves and leaf fragments. Sharptails will also feed in unharvested grain fields in central Alaska, as long as the grain shows above the snow.

Sharp-tailed grouse are found in the Yukon River Valley from Canada to Holy Cross, and in the valleys of the Upper Koyukuk, Upper Kuskokwim, Tanana, and Upper Copper rivers.

Fire is important in the ecology of the sharp-tail, since fire maintains the brushy grasslands that are one of the preferred habitats. Other rather open vegetation types are also used, such as spruce bogs, scrubby woodlands, and birch-aspen parklands. Timberline and muskeg habitat are a more stable source of habitat for sharp-tailed grouse in Alaska. Sunny, grassy knobs are important features of breeding grounds. Dwarf birch bushes on which they feed are an important component of their winter range.

They can be found perching high in spruce trees or hiding in thick underbrush. In the winter, sharp-tails burrow into snow at night for insulation and concealment.

Abundance of Alaska game birds varies widely over the years, but rarely are these fluctuations in the classic “10-year cycle.” The blue grouse of southeastern Alaska and the spruce grouse of coastal areas apparently never drop to low levels like the spruce, ruffed, and sharp-tailed grouse of Interior Alaska. Causes of the fluctuations are not understood but may involve recurrent changes in climate, food and cover conditions, predator abundance (which can be related to snowshoe hare cycles), or genetic makeup of the bird populations. Cold wet springs can cause high mortality in young birds. Heavy hunting pressure is never exerted over a large enough area to be responsible for the widespread changes.

Although a large portion of the grouse harvest occurs incidental to other hunting, some specialized methods are used in taking the individual species. Ruffed grouse and sharp-tails are more difficult to hunt, unless one has a dog. However, these species can sometimes be found “budding” in the tops of aspens and birches in late fall and winter.