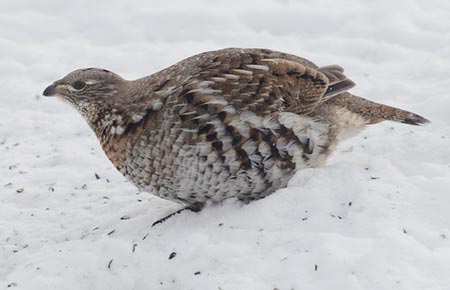 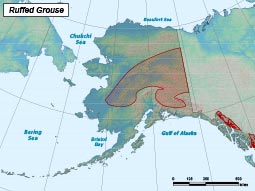 Probably no other grouse defends its young with such intensity as the ruffed grouse hen. If her shrill cry and bold rush in ruffled plumage are not sufficient to ward off a predator, she feigns a broken wing and flutters along the ground in an attempt to distract attention from the concealed chicks.

Like most Alaska grouse, the ruffed grouse establishes and advertises its ownership of a plot of ground in spring. The ruffed grouse mating call — drumming — is a sound produced by the birds beating wings and is not a vocalization. Males drum from particular places in their territory, usually from a log, stump, or rise of ground. Careful study of ruffed grouse in northern states has revealed that the territories are actually established by older cocks in autumn. These dominant cocks are the first to begin drumming in spring. The first-year males, most of them unable to establish themselves on good territorial ground, “wait in the wings” until an older male is killed or until the sexual urge wanes among the early breeders.

In the fall, birds frequent the edges of forest and shrub where wild rose, highbush and lowbush cranberry, and blueberry are available. By late October these birds switch to their winter diet of aspen and willow buds.

Birds are most readily found by focusing on forested areas where dense young stands of aspen predominate as a result of wildfire or forest management activities.

Of the seven species of tetraonids in Alaska, the ruffed grouse population densities oscillate the greatest in a nine-to-ten-year cycle. In the last 40 years of the twentieth century, peaks have come in the latter part of each decade. This trend appears to be continuing. ADF&G biologists used this information to time live trapping and translocation of ruffed grouse from the Interior to the Matanuska-Susitna Valley in the late 1980s and the northern Kenai Peninsula in the late 1990s. Locally, snow depth can be critical to grouse survival in areas of extreme cold as they roost in the relative warmth under a blanket of snow. In the early 1990s there was a local population crash in the Fairbanks area owing to lack of snow and extreme cold.

Grouse are popular with hunters. Although a large portion of the grouse harvest occurs incidental to other hunting, some specialized methods are used in taking the individual species. One of the more rewarding and sporting means of hunting sooty grouse is to stalk “hooting” males in April and May. Spruce grouse hunters generally try to be out on the clear frosty mornings of September and October, when birds are seeking grit at locations where bare soil or gravel is exposed. Ruffed grouse and sharp-tails are more difficult to hunt, unless one has a dog. However, these species can sometimes be found “budding” in the tops of aspens and birches in late fall and winter. 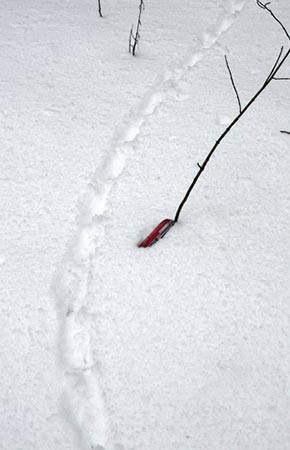 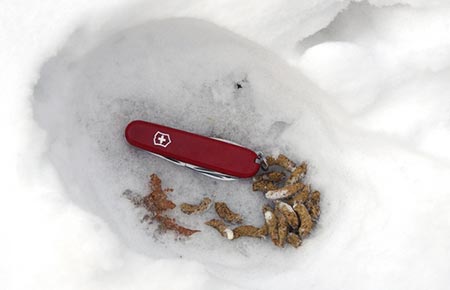 Grouse fecal pellets, left in the impression the bird made in snow as it roosted.