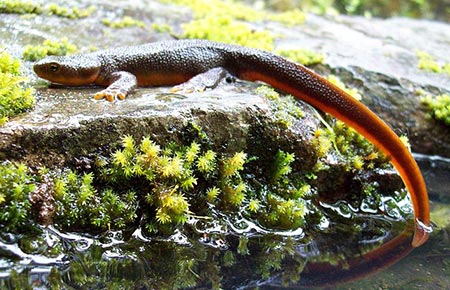 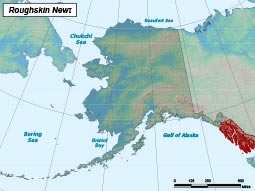 Roughskin newts don't bite, and are harmless unless ingested.

Coloration of the roughskin newt is plain brown to black dorsally, with sharply contrasting bright yellow to reddish orange coloration ventrally, which serves as a warning to predators that they are poisonous. Their eyes are pale yellow and crossed by a distinct, dark bar. The roughskin newt gets its name from the rough and grainy bumps on the surface of the skin, which are glands that secret their highly poisonous neurotoxins. These neurotoxins are generally harmless unless ingested, but may cause skin or eye irritation in humans, especially if eyes are touched after handling newts before washing hands. Skin surface is rough and grainy except in breeding males, which develop a smooth and even slimy skin, swollen vent, flattened tail and dark pads on feet. Males have relatively longer tails and limbs than females. They may grow up to eight inches long.

Breeding, reproduction, and larval development all occur entirely underwater for the roughskin newt. In Alaska, breeding probably commences in April and continues into June, but this can vary depending on elevation, with populations at lower elevations breeding earlier in the year. Roughskin newts exhibit a polygynous mating system in which the male climbs on top of the female in a behavior known as amplexus, which can last from several hours up to two days. The male will eventually release the female and leave a small capsule of sperm which the female then retrieves using her cloaca, which is a posterior vent that serves as the single opening for intestinal, reproductive, and urinary tracts of all amphibians, birds, reptiles, and monotremes.

Shortly after breeding, females will lay their eggs in water, attaching them to aquatic vegetation. Hatching takes five to 10 weeks. Larvae are entirely aquatic, and may metamorphose in late summer after four to five months, or overwinter and metamorphose the following June or July. After metamorphosis, adult newts will reach sexual maturity after four to five years.

The roughskin newt migrates to and from breeding sites during or after seasonal rains. It is often seen moving to breeding sites in large numbers, with males migrating earlier than females.

Roughskin newts can be found throughout Southeast Alaska as far north as Juneau, and on the Alexander Archipelago on Admiralty Island, Shelter Island, and on many islands south of Fredrick Sound. They have also been reported on Bamdoroshni Island, and more recently on Rockwell Island in Sitka Sound. Newts on the mainland near Juneau and Bamdoroshni and Rockwell islands may be the result of transplants from Shelter Sound around 1980 and Ketchikan in the 1960’s.

Although this species is generally terrestrial after metamorphosis occurs, the roughskin newt will return to aquatic habitats during breeding season or during extremely dry weather. On land, the species uses cover which is adjacent to aquatic habitat that they use for breeding, including forests, woodlands, grasslands, open valleys, and ranchland in the open or under rocks, logs, etc.

During aquatic phases, they prefer permanent bodies of water with little to no current and abundant vegetation coverage such as ponds, lakes, reservoirs, and slow-moving streams. Females require aquatic vegetation during breeding season which they attach single eggs to.

Total population size is unknown, but is considered large and stable.

Closely associated with coastal forests, the roughskin newt may be detrimentally impacted by deforestation of areas surrounding breeding sites, though the degree of impact is difficult to quantify. Exposure to UV-B radiation may alter certain behaviors which could have ecological and evolutionary consequences. Studies have also shown that there have been an increasing number of abnormalities in newts found next to road systems where de-icing salts have been used.

In Alaska, amphibians are managed by Alaska Department of Fish and Game under statute 16.05.030, which legally includes amphibians in the definition of “fish”. This statute makes it illegal for anyone to “hold, transport or release” any native amphibians without a valid permit.