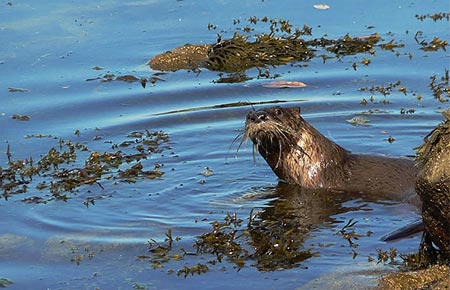 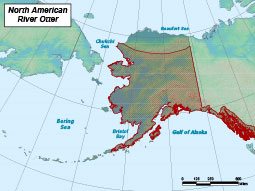 Both young and adults are fond of play. They manipulate rocks or sticks, play tag and hide-and-seek, dunk each other, wrestle, and slide on mud or snow.

The North American river otter is a thickset mammal with short legs, a neck no smaller than its head, inconspicuous ears, and a muscular body that is broadest at the hips. Its tail is powerful and a little more than a third as long as its head and body. Only the hind feet are webbed. Adults weigh 15 to 35 pounds (6.8–15 kg) and are 40 to 60 inches (102–152 cm) in length. On the average, females are about 25 percent smaller than males.

It is sometimes called the land otter (to distinguish from the sea otter).

When prime, river otter fur appears black-brown, with the belly slightly lighter in color than its back. The chin and throat are grayish. Otter fur consists of a very dense undercoat overlaid with longer guard hairs, which are usually removed by furriers.

River otters appear to have well-developed senses of smell and hearing. Their vision is not especially good but may be better underwater than above. Several sets of strong whiskers are used by the animal for hunting and avoiding obstructions.

River otters in Alaska breed in spring, usually in May. Mating can take place in or out of the water. One to six pups (usually two or three) are born the next year any time from late January to June following a gestation period of nine to 13 months. Delayed implantation (a period of arrested embryonic growth) accounts for this variation in the length of gestation.

The pups are born toothless and blind in a den that is usually a subterranean burrow. Their eyes open seven weeks later. When about two months old, they begin to leave the den and shortly thereafter start to swim and eat solid food. They are taught to swim by the female who must coax or drag them into the water. Pups are weaned when about five months old. They will stay with their mother until shortly before her next litter is born.

River otters are sexually mature when they are two years old. A female will then mate with the male of her choice and produce one litter each year. Otters can live and breed for more than 20 years.

River otters in Alaska hunt on land and in fresh and salt water eating snails, mussels, clams, sea urchins, insects, crabs, shrimp, octopi, frogs, a variety of fish, and occasionally birds, mammals, and vegetable matter. Aquatic organisms no bigger than a man's finger are usually eaten at the surface of the water, while larger food is taken ashore.

If a fish or other animal is too big to be eaten at one meal, the remains are abandoned and become available to other flesh-eating mammals and birds. Scraps left out of the water may be a significant source of food available to some scavengers when snow and ice are present.

Otters are graceful swimmers and propel themselves in the water by paddling or vertically flexing their hindquarters and thick tails. They can swim at about six miles per hour and can go faster for short distances by “porpoising” along the surface. River otters dive to depths of at least 60 feet (18 m) and can stay submerged for more than four minutes. They can run as fast as a man and on hard snow or ice reach speeds of more than 15 miles per hour (24 km/hr) by alternately running and sliding.

Signs of river otter activity are seen more often than the animals themselves. They travel several miles overland between bodies of water and develop well-defined trails that are used year after year. They may flatten and dig up the vegetation or snow over an area of several square yards. Scats, twisted tufts of grass, and small piles of dirt and vegetation are commonly found in such areas. Urine and scent deposited on these piles serve as “scent posts” that are used for communication and territorial marking.

During the winter, otters dig elaborate tunnels and feeding dens within the snow over a frozen lake or bay where fluctuations in water levels leave cracks for them to come and go.

River otters are often found in groups. A family unit is made up of a female and her pups, with or without an adult male. The family usually travels over an area of only a few square miles. The female appears to dominate the rest and may drive other animals away from a small area around the den where her pups are living.

Other groups may consist of an adult male and female, a litter of pups that remain together after the family separates, or a group of bachelor males. Male groups usually consist of fewer than 10 individuals. Larger numbers that are occasionally seen together may represent a temporary association of neighboring groups. The groups have no apparent leader. Otters travel together and operate as a social unit but do not cooperate in hunting or share what is caught. They travel over a wide area, and apparently there are no exclusive territories. Fighting among otters is extremely rare, although they are wary of strange individuals.

River otters produce a variety of noises. They growl, caterwaul, and whine. When alarmed, individuals emit an explosive “hah!” When two or more are together, they often produce a mumbling noise that seems to be a form of conversation. A good imitation of this is made by closing the lips and rapidly uttering “hm” several times in a deep voice. A bird-like chirp apparently expresses anxiety and is most often heard when members of a group become separated.

The North American river otter ranges over most of North America north of Mexico. The river otter is found throughout Alaska with the exception of the Aleutian Islands, the offshore islands of the Bering Sea, and the area adjacent to the arctic coast east of Point Lay.

River otters have no significant predators except man, and are occasionally killed unintentionally when they become entangled in fish nets or trapped in crab pots. The river otter’s primary threats include habitat harvest and degradation. They are highly susceptible to pollution such as oil contamination by accumulation of certain compounds due to their position at the top of the food chain.

For the last 10 years, between about 1,200 and 2,400 otters have been harvested annually in Alaska for their pelts. Natives in Prince William Sound once hunted otters with the aid of dogs of a nondescript type that were small enough to enter an otter den. The dogs could usually drive out the otter without a fight.

Wildlife watchers enjoy viewing otters when given the opportunity. Although otters are wary, their playful behavior and social interactions make them particularly interesting.

River otters are currently under no direct management in Alaska. They are open to trapping with no bag limit.