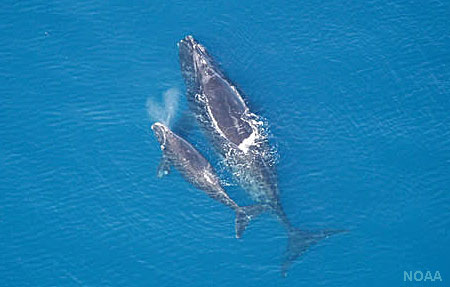 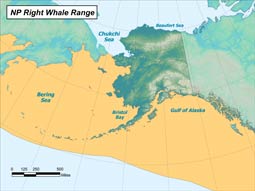 Right whales are one of the rarest marine mammal species in the world, with the eastern North Pacific right whale population found off Alaska in summer the most endangered of all large whales.

Right whales are sometimes confused with bowhead whales. Right whales typically have the obvious wart-like callosities on their heads, while the skin of bowhead whales is usually smooth. The North Pacific right whale is one of the rarest marine mammal species in the world due to heavy exploitation by commercial whalers prior to 1949.

North Pacific right whales consume zooplankton, tiny animals floating in the water column (e.g., copepods and krill), by using a technique called "skimming." With mouths open, they swim through patches of zooplankton, catching the tiny animals on their baleen. Baleen is a comb-like filtering structure made out of the same substance as hair and nails (the protein keratin). Most feeding is believed to occur between spring and fall.

The migration patterns of the North Pacific right whale are unknown. It is believed that they feed during the summer in high latitudes and move to more temperate areas for the winter.

Review of more than 3,600 North Pacific right whale calls detected by passive listening devices between 2000–2006 strongly suggests that the whales migrate into the southeast Bering Sea in late spring and remain until late fall. The earliest calls were heard in late May and the latest in December. The peak calling period was July through October. Most calls were detected from shallow waters over the continental shelf, sites within the designated Critical Habitat area encompassing the southeastern Bering Sea and Gulf of Alaska.

Right whales spend most of their lives underwater. We gain clues about their sub-surface behavior from underwater microphones (hydrophones), data tags, and from whale dive times. Right whales have been seen returning to the surface with mud on their heads, indicating they swam to the ocean’s bottom during a dive.

At the surface, right whales exhibit a variety of behaviors:

The first five behaviors are exhibited by many whale species; the last three are less common.

The North Pacific right whale is distributed from Baja California to the Bering Sea with the highest concentrations in the Bering Sea, Gulf of Alaska, Okhotsk Sea, Kuril Islands, and Kamchatka area. They are primarily found in coastal or shelf waters but sometimes travel into deeper waters. In the spring through the fall their distribution is dictated by the distribution of their prey. In the winter, pregnant females move to shallow waters in low latitudes to calve; the winter habitat of the rest of the population is unknown.

Heavily impacted by whaling, the eastern population of whales that occur off the west coast of Alaska currently has an abundance of only a few tens of animals, making it the most endangered marine mammal population in U.S. waters.

Between the late 1960s and the mid-1990s sightings of right whales in the eastern North Pacific were rare, widely scattered, and almost always involved solitary animals.

Significant sightings occurred in the summer of 1997 when a group of four animals was reported in the southeastern Bering Sea and in 2002 with the first confirmed sighting of a calf in decades. In 2004 a concentration of whales was found that included a minimum of 17 whales. Additionally, a whale which is thought to be a sub-adult animal was observed in Uganik Bay, Alaska in December 2011, being the first modern record of the species on the western side of Kodiak Island and one of the few sightings that has occurred in near-shore waters.

Detections of right whales have been very rare in the Gulf of Alaska, even though large numbers of whales were caught there in the 1800s. From 2004 to 2006, four sightings occurred in the Barnabus Trough region on Albatross Bank, south of Kodiak Island. This area represents important habitat for the relic population of North Pacific right whales, and a portion of this area was designated as critical habitat under the US Endangered Species Act. For a map of the North Pacific Right Whale Critical Habitat area established in 2006 and 2008, visit http://www.nmfs.noaa.gov/pr/pdfs/criticalhabitat/northpacificrightwhale.pdf.

Read more about specific sightings and locations of right whales in Alaska in the NMFS Alaska stock assessment records: http://www.nmfs.noaa.gov/pr/sars/species.htm.

NOAA Fisheries continues to conduct research on the North Pacific right whale to learn more about its population status.

2021 update: According to National Oceanic and Atmospheric Administration scientists, there are about 30 members of the Eastern Group of North Pacific right whales left in the wild. In August 2021, survey vessels encountered two different pairs of right whales, each with two different individuals. Federal biologists were conducting a survey to get distribution density and abundance estimation for large whale species in the Kodiak area. Two survey vessels encountered two different pairs of right whales. Both sightings occurred near Kodiak Island, with the first sighting being on the morning of Aug. 21 around the Barnabas Trough west of Kodiak Island. The second sighting was on the Aug. 24, near the Trinity Islands on the west end of Kodiak. Two of the four whales spotted were completely new individuals, that until then had never been logged by researchers. The other two animals are known to biologists — one was seen nearby in 2006 and the other had been seen earlier this year off the coast of British Columbia.

An accurate estimate of the current abundance of the North Pacific right whale is not available, although the number of whales in the eastern population is considered to be in the 10s of animals. A reliable estimate of the number of whales in the western population is not available. The species is currently listed as endangered under the Endangered Species Act (ESA). To learn more, visit the ADF&G Special Status page for North Pacific right whale.

The current population trend is unknown. Over 11,000 individuals likely occupied the North Pacific prior to whaling.

Threats to the North Pacific right whale potentially include inbreeding depression and low population density effects, collisions with ships and entanglement in fishing gear, pollution, degradation of feeding habitat (e.g., through effects of pollution of zooplankton), human disturbance (e.g., ships and other underwater noisemakers) and climate change and resultant changes in food supply. The potential impact on right whales, and other listed species, from proposed oil and gas development in the North Aleutian Basin should be monitored carefully; including seismic surveys conducted during the early stages of development.

Right whales were a favorite target of whalers in the 1800s and 1900s. They are very slow swimmers and float after being killed. They were harvested for their blubber, baleen, and oil. Commercial hunting of right whales has been illegal since 1949.

If you see a right whale consider yourself very fortunate as sightings of this endangered species are extremely rare. North Pacific right whales are managed by the National Marine Fisheries Service (NMFS) under the National Oceanic and Atmospheric Administration (NOAA Fisheries) and any information about sightings should be promptly reported to NOAA Fisheries. Whale viewing is a popular activity in Alaska and can have serious impacts on whale populations if not conducted properly. Most viewing occurs where whales congregate at concentrated food sources that are critical to their survival. During this activity it is imperative to stay at a minimum of 100 yards away from whales to avoid the dangers of ship and prop strikes. Pursuit of whales is prohibited by law. Managing human behavior around viewing activities is important to the continued health of whale populations.

North Pacific right whales are managed by NMFS. They were first protected by the 1931 international or multi-national Convention for the Regulation of Whaling, which took effect in 1935. However, neither Japan nor the Soviet Union signed this agreement, so it was theoretically still legal for them to kill right whales. In 1949, the International Convention for the Regulation of Whaling protected right whales from commercial whaling. This species also falls under the legislation of the U.S. Marine Mammal Protection Act and the U.S. Endangered Species Act.

ADF&G has contributed funding to the acoustic monitoring of North Pacific right whales. In August 2004, the Cetacean Assessment and Ecology Program (CAEP) at the National Marine Mammal Laboratory initiated a North Pacific right whale tagging project. This is a collaborative study with the whale-tagging group at the Greenland Institute for Natural Resources in Copenhagen, Denmark. Three main questions are being addressed by this study:

The project should provide information about specific habitat use in the Bering Sea, with the potential for investigating the oceanographic conditions of those areas.

Learn more about how local groups address issues of conserving right whale habitat and gas and oil development in the North Aleutian Basin:

To report injured or dead right whales and other marine mammals: