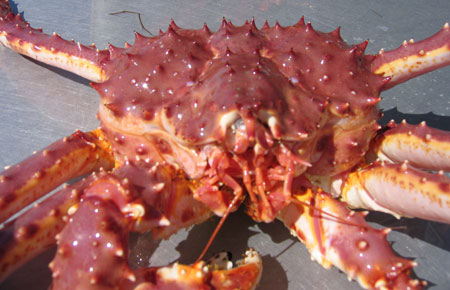 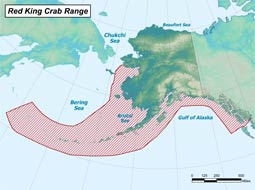 When red king crabs grow too big for their shell (exoskeleton), they shed their shell by absorbing water and cracking it, a process called molting.

Red king crabs (Paralithodes camtschaticus) are a species of large crab that appear dark red or burgundy in color. Red king crabs can grow very large with carapace (the shell covering their back) lengths up to 11 inches and a five foot leg span. Red king crabs have "tails," or abdomens, that are distinctive, being fan-shaped and tucked underneath the rear of the shell. They also have five pairs of legs; the first bears their claws or pincers, the right claw is usually the largest on the adults, the next three pairs are their walking legs, and the fifth pair of legs are small and normally tucked underneath the rear portion of their carapace. These specialized legs are used by adult females to clean their embryos (fertilized eggs) and the male uses them to transfer sperm to the female during mating.

Adult females brood thousands of embryos underneath their tail flap for about a year's time. When the embryos are fully developed they hatch as swimming larvae, but they are still susceptible to the movements of tides and currents. After feeding on plant and animal plankton for several months and undergoing several body changes with each molt, the larvae settle to the ocean bottom and molt into nonswimmers, looking for the first time like king crabs as we normally think of them, except they are smaller than a dime. Red king crabs settle in waters less than 90 feet deep.

Because a crab's skeleton is its shell (made mostly of calcium), it must molt its shell in order to grow. Juveniles molt many times in their first few years, then less frequently until they reach sexual maturity in four or five years. Adult females must molt in order to mate but males do not. Adult males often skip a molt and keep the same shell for one or two years. Red king crabs can grow very large with the record female and male weighing 10.5 and 24 pounds, respectively. These large crabs were estimated to be 20–30 years old. The male's leg span was nearly 5 feet across.

Adult red king crabs exhibit near shore to offshore (or shallow to deep) and back, annual migrations. They come to shallow water in late winter and by spring the female's embryos hatch. Adult females and some adult males molt and mate before they start their offshore feeding migration to deeper waters. Adult crabs tend to segregate by sex off the mating-molting grounds. Red, blue, and golden king crabs are seldom found co-existing with one another even though the depth ranges they live in and habitats may overlap. Adult male red king crabs in the Kodiak area have been known to migrate up to 100 miles round-trip annually, moving at times as fast as a mile per day.

Red king crabs occur from British Columbia to Japan north to the Bering Sea with Bristol Bay and the Kodiak Archipelago being the centers of its abundance in Alaska. Red king crabs can occur from the intertidal zone to 100 fathoms or more.

The Bristol Bay red king crab stock has shown a trend of increasing abundance since the late 1990s. Fishing effort in this fishery has remained high with an average number of permits at 258 during 2000–2004.

Norton Sound red king crab stock has also shown a trend of increasing abundance since a recent low in the mid 1990s. The fishery provides small summer and winter fisheries with an average fishing effort of 43 permits during 2000–2004.

The Pribilof Islands red king crab fishery has been closed since 1999 due to a relatively low stock abundance, low precision of the abundance estimate and to avoid bycatch of the depleted Pribilof Islands blue king crab, as the distribution of these two species overlap.

The red king crab fisheries in Kodiak, the Alaska Peninsula, Cook Inlet, and Prince William Sound areas are closed due to low abundance. A new fishery for red king crab began in the central Aleutian Islands (Petrel Bank area) after high densities of legal crabs were encountered in a pot survey. The fishery began with a small GHL in 2002 and 2003 but was closed in 2004 and 2005.

Provisions are made in Title 5 of the Alaska Administrative Code for subsistence fisheries on red king crab in four general areas: Yakutat [5 AAC 02.108]; Kodiak [5 AAC 02.420]; Alaska Peninsula-Aleutian Islands [5 AAC 02.520]; and the Bering Sea [5 AAC 02.620]. Bag limits and seasons are generally more liberal and gear requirements less restrictive than for personal use or sport fisheries. Unlike personal use fishery catch, which may be shared only with immediate family members, subsistence fishery catch may be shared with all members of the community.

A near peak harvest of red king crabs occurred in the 1980/81 season, but three years later the fishery crashed, as harvests were down sixty-fold, and the four top historical producing areas were closed completely to red king crab fishing for the first time. A long period of few juvenile king crabs surviving to adult size (recruitment) was the primary reason for the crash. Biologists theorize that fish predation on king crabs and a warmer ocean environment were probably responsible for the poor recruitment. Red king crab populations have remained depressed statewide (except in Southeast Alaska) since 1983.

With the sharp decline of red and blue king crab populations, some commercial fishers have targeted on golden king crabs. From 1980-95 122 million pounds of golden king crabs, worth $338 million, have been harvested by fishermen statewide, with the bulk of this catch coming from the waters surrounding the Aleutian Islands.

* Not adjusted for inflation

The U.S. federal government through the North Pacific Fishery Management Council (NPFMC) and the State of Alaska jointly manage the Bering Sea and Aleutian Islands crab stocks, whereas the State of Alaska solely manages the Gulf of Alaska crab stocks. Harvest strategies vary among areas and species, but all crab fisheries have minimum size limits, male-only restrictions, and specific fishing seasons (i.e., size, sex, and season, or “3-S” management). Minimum size limits have been enforced to provide at least one opportunity for males to mate with females. Single-sex harvest has been in effect to protect mature females for reproduction and specific fishing seasons are set to avoid harvesting crab during mating and molting (soft-shell) periods. A number of king and Tanner crab fisheries are managed with a guideline harvest level (GHL) determined either from available abundance estimates and appropriate target harvest rates or from historical average catches. The fishery performance within a season is monitored, and if the fishery is expected to exceed the GHL before the declared closure date, then the season is closed by an ADF&G Commissioner’s emergency order. Incidental mortality of crabs in other fisheries (trawl, pot, and dredge) is reduced by enforcing maximum allowable crab bycatch thresholds. Additional management measures include pot limits, permits, onboard observers, registration areas, reporting requirements, vessel tank inspections, legal gear specifications, and provisions for gear placement, removal, and storage.

Six Bering Sea crab stocks are managed by the NPFMC according to fishery management plans with thresholds for overfishing (an excessive annual rate of removal) and overfished (a minimum biomass level). These stocks are Bristol Bay red king crab, Bering Sea Tanner crab, Bering Sea snow crab, St. Matthew Island blue king crab, and Pribilof Islands red and blue king crabs. If the stock declines below the ‘overfished’ biomass level, then the stock is declared overfished, and management actions in the form of reducing fishing mortality or rebuilding plans must be implemented.

In addition to federal management regulations, the ADF&G has developed harvest strategies for king and Tanner crab stocks in selected fisheries of the Bering Sea and Gulf of Alaska. The harvest strategies aim to maintain sufficient spawning biomass for stock productivity by controlling the removal of mature males. Minimum stock size levels (mainly of mature portion) and minimum GHLs (for a few stocks) are estimated for assessing stock viability and for assuring manageability under continued fishing.

The Commercial Fisheries Division of the Alaska Department of Fish and Game (ADF&G) conducts stock assessment surveys for red king crab in seven areas throughout the state. Trawl surveys are conducted on an annual basis in the Kodiak area, annual or biennial in Cook Inlet and Prince William Sound, and triennial in Norton Sound. An annual pot survey is conducted in Southeast Alaska, and occasional pot surveys in the Pribilof Islands, and the Petrel Bank grounds in the central Aleutian Islands.

Besides population estimation, stock assessment surveys are used to gather life history information on red king crab. Over the years, life history studies have provided information on movement, growth, natural mortality, and fecundity among others. This helps to improve population modeling techniques which support sustainable management of stocks.

There are a number of ways to get involved in the regulatory process for red king crab. Since red king crab stocks in Bristol Bay are jointly managed through the North Pacific Fishery Management Council (NPFMC) and the State of Alaska, you may get involved at both the State and Federal levels by attending Alaska Board of Fisheries (BOF), NPFMC meetings, participating in local advisory committee meetings or writing proposals to the BOF.