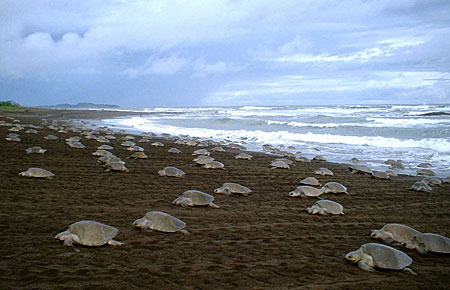 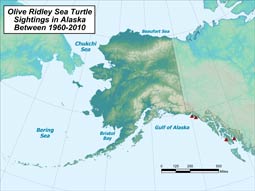 Olive Ridley sea turtles reach sexual maturity around 15 years of age. Once reaching maturity, females nest once or twice every year. Clutch size averages 100 eggs. In the breeding season, large groups of turtles gather in the waters just offshore of their nesting beaches. Simultaneously, all the turtles come ashore in huge numbers in what is known as an “arribada.” During arribadas, hundreds of thousands of females come ashore to dig their nests and lay their eggs. Not all females nest during the arribada. Some females nest alone or may practice a mixed strategy where they nest once during an arribada and once as a solitary nester in the same season.

The eggs incubate for 50–60 days. After incubation, hatchlings emerge from the nest and make their way to the water. These hatchlings are approximately 1.5 inches long and weigh less than an ounce. They are generally black and may have a green hue along their sides.

Olive Ridley sea turtles feed on a wide variety of prey including lobster, crab, tunicates, mollusks, shrimp, and fish. They are also known to consume algae. This sea turtle is capable of diving up to 500 feet when foraging for benthic invertebrates.

Olive Ridley sea turtles migrate each year between their pelagic foraging areas and coastal breeding and nesting grounds. These migrations can cover thousands of kilometers. They do not follow specific migration paths but disperse to different areas from the breeding grounds.

The Olive Ridley sea turtle is distributed throughout tropical and subtropical regions of the Pacific, South Atlantic, and Indian Oceans. In the Eastern Pacific, they are found from Southern California to Northern Chile. In the South Atlantic they occur along the coasts of West Africa and South America. Though solitary nesting occurs on beaches throughout its range, arribadas occur on only a few beaches in the Eastern Pacific and Indian Oceans including beaches of Mexico, Nicaragua, Costa Rica, Panama, and India. Though not common in Alaska, sea turtles do occasionally visit Alaska’s Gulf Coast waters. Olive Ridley sea turtles have been reported in Alaska three times between 1960 and 2007.

This sea turtle species is predominantly pelagic, inhabiting the waters of the open ocean, but can sometimes be foraging in coastal areas. The species moves to coastal waters during the breeding season, and females come ashore to lay their eggs.

There has been a 50% decline in the global population of Olive Ridley sea turtles since the 1960s. Though the overall trend is decline, some populations are stable or increasing. This decline is due to long-term historical harvest, incidental take in fisheries, and degradation or loss of nesting habitat.

The biggest threat to the Olive Ridley sea turtle is harvest. Their habit of coming ashore in incredible densities during arribadas makes them very vulnerable to overharvest. In many parts of the world their eggs are collected and the adults are killed for consumption. This practice prevents the recovery of the species and may lead to continued declines. Bycatch in fisheries is another major problem for Olive Ridley sea turtles. These turtles are frequently caught in trawls and longline gear. They may also become entangled in gill nets and purse seines causing them to drown. Loss of nesting habitat is also a threat.

Management of Olive Ridley sea turtles falls under the jurisdiction of both the National Marine Fisheries Service (NMFS) and US Fish and Wildlife Service (USFWS). NMFS is responsible for managing sea turtles at sea. When the turtles come ashore on the beaches to nest, they are the responsibility of USFWS. NMFS has implemented several fishery management measures to reduce sea turtle interactions with commercial fisheries including requiring turtle excluder devices (TEDs) on all trawl gear and the use of circle hooks in longline fisheries. The Olive Ridley sea turtle is protected under the Inter-American Convention for the Protection and Conservation of Sea Turtles and the Endangered Species Act (ESA).