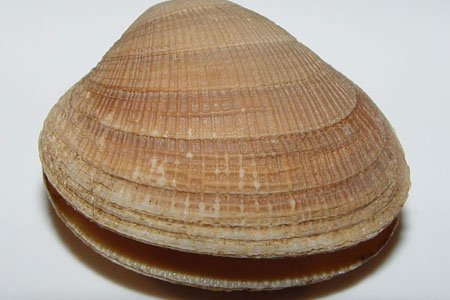 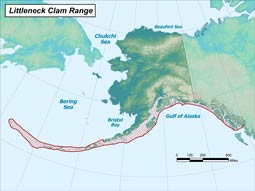 You can tell the age of a littleneck clam by its shell rings.

Littleneck clams, Leukoma staminea, also known as "rock cockle" or "bay cockle", are a widespread mollusk harvested by commercial and sport/personal fisheries. They are found along the Aleutian Islands, throughout parts of Alaska, south to Cape San Lucas, and Baja California.

Littleneck clams can be identified by their oval shell with well-defined, radiating ribs and less prominent, raised, concentric rings. There is a heart-shaped impression in front of the umbo (a knob-like limb on the surface of a clam’s shell, near the hinge). Their color is highly variable. Littleneck clams are yellowish gray or gray if inhabiting sloughs and bays, while specimens collected along the open coasts are often whitish with geometric patterns of wavy brown lines or blotches on sides. The interior surface of the clam is smooth and white. Overall, shapes differ widely in different localities; some are long and narrow, others are short and broad.

Although sexes are separate in littleneck clams, it is not uncommon to find hermaphroditic individuals (having sex organs of each gender). Time of spawning varies throughout its range, depending largely on water temperature. A shortened spawning period is characteristic of clams at the northern and southern limits of their range, and appears to be primarily a temperature-related phenomenon. In Southcentral Alaska, spawning starts in late May when the water temperature is about 8 degrees Celsius. In Prince William Sound, there is thought to be only one annual spawning period lasting up to 4 months.

During spawning, eggs and sperm are discharged through the inhalant siphon and mass fertilization takes place in the open water. After fertilization, the eggs divide rapidly and embryos develop into larvae in only12 hours. The straight-hinge stage develops in the next 24 hours. Larvae feed on phytoplankton and are about 0.15mm at one week. The larvae are free floating prior to metamorphosis, when the larva develops a foot, moves to the bottom, and searches for a suitable surface to dig in. Once settled, they are called “spat”.

Males and females grow at the same rate and are the same size, ranging anywhere from 35–55mm long. They are sexually mature at 3-4 years of age. Littleneck clams are plump and firm in the late spring and summer, but thin and watery during the early months of the year. They can live for 10–13 years.

Littleneck clams have four highly-specialized gills, two on each side. The gills are used for filter feeding; they strain suspended food particles from the water. Postlarval clams can feed only on particles less than 10mm in diameter—primarily benthic diatoms and perhaps sedimentary bacteria. They feed most actively during the flow of the tide and usually no food is found in the stomachs of clams taken during low tide. Similar to oysters, littleneck clams absorb dissolved substances from the water, such as calcium, for shell development.

Littleneck clams have many predators; however they are most-notoriously preyed on by moon snails, octopus, sculpin, halibut, sea stars and crabs. A few species of carnivorous gastropods also feed on littleneck clams.

Littleneck clams often live on small beaches in pockets along rocky shorelines or in small patches on large beaches. The best beaches for littleneck clams are those with coarse sand or fine gravel mixed with mud, stones, or shells. They do poorly in fine sand. Adults burrow to a depth of 20 cm but are also found within 15 cm of the surface.

Littleneck clams are found throughout the Aleutian Islands, south to Cape San Lucas, and Baja California; however, they are most abundant north of Oregon.

Populations of littleneck clams are decreasing across much of their range, although appear to be stable throughout Alaska.

Like other natural resources, the littleneck clam is increasingly being subjected to threats from overharvest, water pollution, and loss of habitat due to urbanization. They are particularly sensitive to water-quality issues such as high levels of copper and trace amounts of oil in their environment.

The Pacific Coast clam industry is small, about 1% of the total U.S. catch. However, it is an important part of the heritage of many coastal communities and is a factor in the economies of some rural areas. Most littleneck clams are sold fresh and un-shucked to wholesale fish houses. The littleneck clam is one of the most popular species harvested intertidally for recreational purposes in Puget Sound and along the Washington coast.

Littleneck clams are managed by the Commercial Fisheries Division of the Alaska Department of Fish and Game.

There are several opportunities for direct public involvement in management of the littleneck clam. You can get involved by submitting either a proposal or a petition to the Board of Fish.