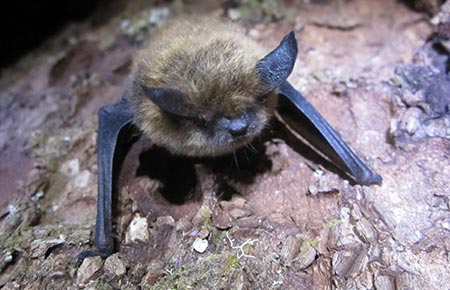 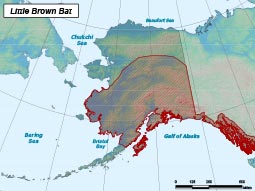 Little brown bats are small, flying, nocturnal mammals. Their fur varies in color from cinnamon-buff to dark brown on their back, and buffy to pale gray on their underside. The hairs on their back have long glossy tips. Juveniles are more uniformly dark brown in color.

Bats have a tragus, a fleshy projection that covers the ear canal (the entrance to the ear) and aids in echolocation. People have a tragus, too, but it doesn’t play a role in echolocation as it does in bats. The shape and length of the tragus relative to the ear can be used to help identify bat species. In little brown bats, the tragus is about half as long as the ear with a blunt tip.

Bats sleep during the day and hunt and feed during the night. When not feeding, bats can be found resting in a variety of natural and man-made structures — these resting areas are called roosts. The type of roost used depends on the sex and reproductive status of the bat and also the time of year. Roosting bats can conserve energy by going into torpor. Torpid bats reduce their metabolic rate, heart rate, and body temperature, thereby dramatically reducing their energy consumption.

In summer, reproductive females cluster together in large maternity roosts while pregnant or nursing their young. Clustering helps the bats raise the temperature in the roost, which speeds the growth and development of their young. Most of the known maternity roosts in Alaska are located in buildings — because of their warmth, attics and furnace rooms are particularly attractive as maternity roost sites. A maternity roost of little brown bats has also been documented at a hot springs in Southeast Alaska.

Male bats and nonreproductive females usually roost singly or in small groups during the day. Because these bats are not constrained by the need for a warm roost, they typically use a much wider range of roost types, including snags, live trees, rock crevices, caves, logs, stumps, and buildings. Bats will roost in cracks just 3/8ths of an inch wide.

Very little is known about winter roosts of little brown bats in western North America. Although the little brown bat hibernates almost exclusively in caves and mines in the east, often in large groups, it is rarely encountered in these habitats in the west. Cavers and researchers have found evidence of year-round bat use of a few caves on Prince of Wales Island in Southeast Alaska, but the numbers of bats involved are small. Acoustic monitoring at known maternity roosts in buildings in Southeast Alaska suggest that at least some individuals also overwinter at these roost sites, but again the numbers involved are small. The only information on overwintering bats in the rest of the state comes from the Alaska Bat Monitoring Program. All of these observations of overwintering bats have been in buildings — there are no records of bats in northern areas of the state using natural substrates such as caves, tunnels, mines for hibernacula.

Of the bat species located in Alaska, the little brown bat is the most common and widespread. This species has been documented in habitats ranging from temperate rainforests in southeastern Alaska, to the spruce/birch forests of the interior, to the treeless, shrub-dominated communities in the western region of the state. Their distribution appears to be limited by geographic barriers, roost availability, climate, length of night, and prey availability.

Little brown bats usually mate during August-October. Ovulation and fertilization are delayed until spring, and gestation lasts 50–60 days. Females give birth to a single pup in their first or second year.

Normally, bats hang head down; females giving birth reverse their position, so their head is up, and catch the newly-born pup with their tail membrane. Offspring are born with deciduous incisors that they use (along with their thumb and hind feet) to cling to their mothers. The young are weaned and become capable of flying on their own within about three weeks.

In Southeast Alaska, pregnant females have been captured as early as June 4 and as late as July 2, and juvenile bats have been captured or collected from mid-June through late August. A spike in observations of bats in mid-August suggests young bats emerge in August in more northern reaches of the state.

Little brown bats are insectivorous and nocturnal. They use echolocation to find and capture their insect prey and often hunt over lakes, ponds, sloughs and slow-moving streams and rivers. They prey on flying insects such as moths, mosquitoes, beetles, mayflies, caddis flies and midges. In southeast Alaska, the little brown bat was also found to consume spiders. The short duration of darkness during summer nights at high latitudes reduces the amount of time available for foraging.

Acoustic monitoring in Southeast Alaska has found that little brown activity drops off at most monitoring sites by September and does not pick up again in spring until late April or May. An ongoing radiotelemetry study found that most radiotagged individuals departed the Juneau area by early October. Two individuals were tracked heading west as they began their migration, but researchers lost their signal over Admiralty Island and their final destination remains unknown.

Whether individuals migrate from the northern latitudes of central Alaska to hibernate in milder southern regions along the coast is unknown. If they did, bats that summered near Fairbanks would have to travel more than 400 km across the Alaska Range to milder coastal regions for the winter. Although little brown bats in Ontario, Canada are known to travel at least 220 km to hibernate, observations of bats in Fairbanks in early October, and near the Tanana River in early May suggest that little brown bats either migrate long distances very quickly or hibernate in the vicinities of these sightings.

The little brown bat is the only Myotis species collected north of 59°N latitude and is widely distributed across Alaska in summer as indicated by museum records. Citizen Science observations have expanded the known range of little brown bats even further, to the Yukon River north of Fairbanks in the north and all the way to Kotzebue in the west. Both specimen records and acoustic monitoring indicate that little brown bats are found throughout Southeast Alaska, from Yakutat to Ketchikan.

This species has been documented in habitats ranging from temperate rainforests in southeastern Alaska, to the spruce/birch forests of the interior, to the treeless, shrub-dominated communities in the western region of the state.

Little brown bats are managed as “unclassified game” in Alaska and there are no seasons or bag limits. Bats may only be harassed or killed under the terms of a wildlife nuisance permit issued by the Alaska Department of Fish and Game.

The population size and status of little brown bats in Alaska is unknown. They are apparently widespread but in low numbers. Maternity colonies ranging in size from 70 to 200 (in observations in Interior Alaska) and 461 (White Sulfur Hot Springs, Southeast Alaska. A large maternity colony in Juneau in 2012 contained more than 900 bats and several other colonies ranging in size from 12 to 275 bats have also been documented.

This species has been documented in forested areas of Southeast Alaska, but bat activity was rare in second-growth forests. The extent of past and future timber harvest in southeastern Alaska may have a significant detrimental effect on Myotis species.

Currently, insectivorous bats in North America are experiencing sudden and dramatic population declines resulting from two new threats: Large-scale wind energy development is causing unprecedented mortality in several migratory tree-dwelling bat species in eastern North America; and White Nose Syndrome (WNS), a devastating fungal infection that has contributed to the death of 5–6 million bats in northeastern North America since 2006. Little brown bats, formerly one of the most abundant bats in the northeast, have almost disappeared from the region. Hibernating bats with WNS arouse more frequently and for longer than normal, causing them to burn their winter fat reserves prematurely and resulting in death from starvation. Although bat-to-bat contact is believed to be the primary means of transmission, humans may also play a role by spreading fungal spores on clothes and caving gear.

The lack of information on overwintering habits of bats in Alaska, as well as the absence of any baseline data on population sizes and trends will complicate the ability to detect WNS and monitor its impacts should the disease reach Alaska. The extent to which these threats may impact the conservation or persistence of bats in Alaska is unknown because critical information on the distribution, habitat associations, and ecology of Alaska’s bats is lacking.

In some places in the Lower 48, bats are prized as a wildlife viewing experience.

The little brown bat is managed as an unclassified game species in Alaska, meaning that they cannot legally be harassed or killed, except under the terms of a wildlife nuisance permit issued by the Alaska Department of Fish and Game.

M. lucifugus has been reported roosting in several caves throughout the extensive karst system in Southeast Alaska, which may be an important resource for this. Careful documentation of bat use (including seasonality) should be included in any karst management scheme.

For several species of forest-dwelling bats, individuals and entire groups frequently switch roosts. As a consequence of such movements, conservation of roosting habitat in forests requires protection at the stand level as opposed to individual trees. Timber harvest plans for the Tongass National Forest should be managed to prevent significant elimination of potential roost sites and habitat fragmentation. An adequate supply of roosting sites, foraging habitat, and other critical habitat should be maintained.

ADF&G has established a network of year-round acoustic monitoring station across Southeast Alaska to learn more about when bats emerge in spring, when they disappear in the fall, and to compare seasonal activity patterns across the region. In addition, ADF&G is trapping and radiotagging little brown bats to learn more about the timing of reproduction and migration, locations of maternity and day roosts, and where little brown bats go in winter.

Little is known about the ecology of bats in Alaska. Their distribution and abundance during the summer months is poorly understood and few summer maternity roosts have been documented. Even less is known about where our bats go in the winter. Because bats occur in low densities in Alaska, documenting their summer distribution, roosting habitat, migration habits, and winter hibernacula is a challenging task. It is important that we continue to learn more about bats and bat ecology in Southeast Alaska so we can conserve resources critical to their survival and prevent population declines. Visit the Southeast Alaska Bat Monitoring Program web page for more information about how you can help.