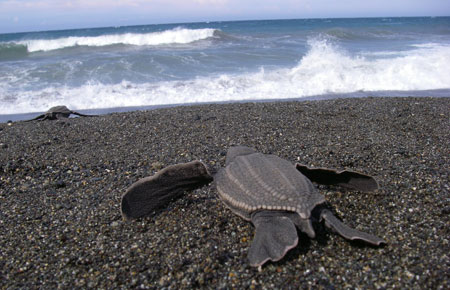 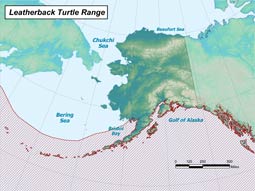 The leatherback sea turtle is the largest living reptile in the world.

Sea turtles are large, aquatic reptiles with forelimbs specially modified for swimming. These front flippers are significantly larger than the back flippers. Their shell is composed of two pieces, the top, or carapace, and the bottom, or plastron.

The leatherback sea turtle, unlike other sea turtles, lacks bony plates on its shell. It’s carapace is made up of leathery, oily connective tissue covering loosly interlocking dermal bones. Its shell is mostly black with pinkish white on the underside. This sea turtle also has pink and white spots on its head. It’s back flippers are paddle shaped. A leatherback’s front flippers lack claws and scales and are elongated compared to other sea turtle species. There are seven ridges that run down the turtle’s back. These ridges and the elongated flippers are adaptations to facilitate long distance migrations.

Leatherbacks mate in waters adjacent to the nesting beach or along migration corridors. Females nest every 2–3 years. A female leatherback will lay several nests during a single nesting season generally 8–12 days apart. Average clutch size is 100 eggs. After 60–65 days, the eggs hatch, and the hatchlings emerge from the nest. The hatchlings are only 2–3 inches long. They will stay in tropical waters until they grow to a carapace length of 100 centimeters.

Leatherback sea turtles feed on soft-bodied pelagic prey including salps and jellyfish. Their mouths are specially adapted to this diet. They have pointed cusps and sharp-edged jaws. They also have backward-pointing spines in their mouth and throat to help retain their prey. It is thought that they may dive to the deep scattering layer to feed on jellyfish or dive to feed on vertically migrating species. They will sometimes eat fish or seaweed.

Leatherbacks are the most migratory of all sea turtles. The females migrate to tropical waters to nest then return to temperate waters to forage travelling thousands of kilometers. Some transequatorial migrations have been documented.

Leatherbacks are the most wide-ranging sea turtle species. They are found throughout temperate to tropical waters worldwide. They are capable of tolerating much colder temperatures than other species due to counter-current exchange, high oil content, and large body size. 19 leatherbacks have been reported in Alaska between 1960 and 2007. Prior to 1993, they were the most common sea turtle species in Alaskan waters.

Leatherback sea turtles are a highly pelagic species spending most of their time in the open ocean. However, they are known to forage in coastal waters. Females come ashore to nest preferring beaches backed by vegetation near deep water and rough seas.

Though Pacifc beaches once supported the largest breeding population of leatherbacks, nesting on Pacific beaches has decreased by over 80%. In other portions of its range, the decline has been less severe. In some areas the population is thought to be stable or increasing. The global trend for the species is unknown.

The greatest threats to leatherback sea turtles is ongoing long-term harvest and bycatch. In many countries, leatherback sea turtles and their eggs are still harvested. Incidental catch in fisheries is also a major source of mortality for this species. They are most often entangled in gillnets but are also caught in longlinges, trawls, traps and pots, and dredges.

Leatherback sea turtles are targets for directed harvest in many countries. Leatherback eggs and adults are harvested on nesting beaches. Adults and juveniles are also taken off foraging grounds. The eggs are used for consumption while the turtles are used for meat and oil.

Management of leatherback sea turtles falls under the jurisdiction of both the National Marine Fisheries Service (NMFS) and US Fish and Wildlife Service (USFWS). NMFS is responsible for managing sea turtles at sea. When the turtles come ashore on the beaches to nest, they are the responsibility of USFWS. NMFS has implemented several fishery management measures to reduce sea turtle interactions with commercial fisheries including requiring turtle excluder devices (TEDs) on all trawl gear and the use of circle hooks in longline fisheries. The leatherback sea turtle is protected under the Inter-American Convention for the Protection and Conservation of Sea Turtles and the Endangered Species Act (ESA).