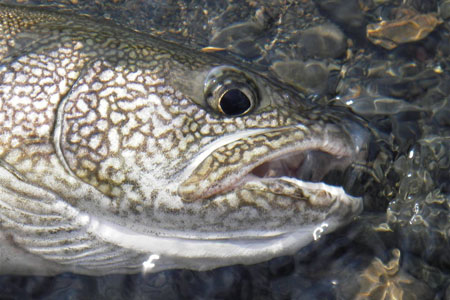 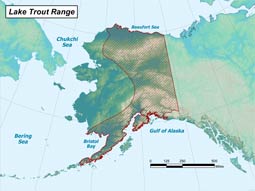 Lake trout have a body shape similar to that of trout and salmon. They generally have small cream or yellow, irregular shaped spots on a silvery-to-dark background. Males and females are similar, with males having a slightly longer, more pointed snout. Lake trout can be distinguished from other chars by the absence of pink spots and their deeply forked tail. A breeding male has dark stripes on its side, and lacks the red or orange exhibited by Dolly Varden and Arctic char. There is usually a white leading edge on the pectoral, pelvic, and anal fin. Alaska lake trout can live longer than 50 years but more typical maximum ages are around 20 years. The maximum size attained in some Alaskan populations probably exceeds 50 pounds, and 8- to 10-pound fish can be taken in many of the state's fisheries. The current record is a 47-pound laker caught in Clarence Lake in July 1970.

Lake trout prefer large, deep, cold lakes in which they spend their entire lives. Spawning takes place over clean, rocky lake bottoms in September or October. Lake trout do not excavate a redd but instead broadcast spawn over the spawning bed. Males reach the spawning sites before the females each year and each evening. Spawning takes place at night with peak activity occurring after dusk. Eggs hatch early in the following spring. Little is known about the early life history of lake trout which are thought to be reclusive while feeding on plankton during their first few years of life. Spawning occurs for the first time after five to eight years. Lake trout spawn every other year or less frequently in northern Alaska, while in more southern Alaskan populations, such as those on the Kenai Peninsula, spawning may occur annually. Lake trout growth varies from place to place depending on diet, water temperature, altitude, and genetics.

The diet of lake trout varies with the age and size of the fish, locality, and the food available. Food items commonly include zooplankton, insect larvae, small crustaceans, clams, snails, leeches, several kinds of fish, mice, shrews, and even occasional young birds. When available, lake trout may feed extensively on other fish such as whitefish, grayling, sticklebacks, and sculpins.

In Alaska, lake trout inhabit the deeper lowland lakes along the central Arctic coastal plain, as well as waters in the Brooks Range and Alaska Range. They are not found in the Yukon-Kuskokwim lowlands or the coastal drainages of Southeast Alaska. Lake trout inhabit clear, mountain lakes in northern Alaska as well as turbid glacial lakes on the north side of the Chugach Range and Kenai Peninsula.

The lake trout population is sustainable and healthy in Alaska. In the lower 48, lamprey predation and overfishing or overexploitation by commercial fisheries has taken their toll.

Because of the long life span of lake trout, most of the biomass of a population will consist of fish five to 15 years of age or older. If these large fish are removed in a commercial or sport fishery, it will take several years to replace them and restore the biomass to its original abundance. Production rates are low in lake trout populations, making them vulnerable to overfishing. Overexploitation is always a threat to any species. With continued proper management and sound stewardship, the lake trout will be available for future generations.

A general knowledge of lake trout habits can pay dividends to the angler. In spring, when lake waters are cold, trout can be found near the surface and along the shoreline. As the season progresses, lakers go deeper and finally reside beneath the thermocline. Most successful lake trout anglers use bright spinners or spoons while fishing from shore or near inlet and outlet streams. Trolling slowly through deep, colder water layers and along steep rock walls or dropoffs produces good catches of lake trout. Large spoons, often in combination with cut bait, are most effective when fishing through the winter ice. Natural mortality is low in most lake trout populations; however, slow growth, alternate year spawning, and older ages at maturity combine to make lake trout populations susceptible to overharvest by subsistence and recreational fisheries. The practice of good conservation ethics will go a long way towards ensuring healthy trout populations for future Alaska anglers.

Lake trout are renowned for their delicate flavor and firm meat.