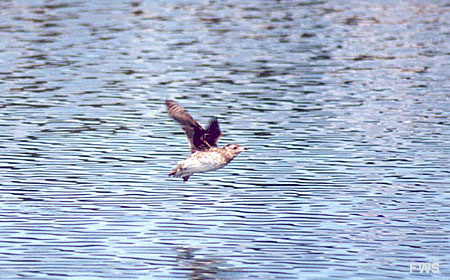 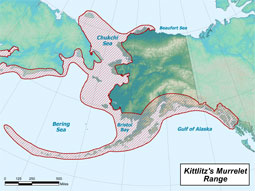 Kittlitz’s murrelets were named for Heinrich von Kittlitz, the German zoologist who first collected this species in the 1820s.

The Kittlitz’s murrelet is a small, stocky seabird with a relatively large head and short bill and tail. There are no known measureable differences in appearance between females and males. Its summer plumage is variable consisting of a light, off-white underside, with brown, gray, and reddish-gold feathers on its back, wings, and head. Its eye appears dark and relatively large, and is thought to aid in foraging in turbid waters. The Kittlitz’s murrelet has a very different winter plumage with white underside, throat, and face, with black or dark gray back, wings, cap, and sometimes a distinct black necklace. In flight the Kittlitz’s murrelet appears small and fast with very rapid wing beats; it usually flies low to the water.

The Kittlitz’s murrelet can be confused with the marbled murrelet, a species similar in size and plumage. Distinguishing features of the Kittlitz’s murrelet are white outer tail feathers, white above the eye in winter plumage, a shorter bill, and often a white trailing edge of the secondary wing feathers.

There is not a lot of information on the breeding and reproduction of Kittlitz’s murrelet. They nest on steep unvegetated mountainsides or slopes above the timberline near glaciers and cirques. It is thought that they are monogamous and lay one egg in June. The eggs hatch in July, and the young fledge in August. They nest in solitary pairs in low densities and may exhibit site fidelity for their nesting grounds.

Researchers do not clearly understand where Kittlitz’s murrelets spend the winter months. During the summer they move into nearshore waters, such as Prince William Sound, Glacier Bay, and the Aleutian Islands, and breed on exposed slopes above the ocean. They are consistently present in these summer habitats from June-August, but then disappear in early fall and through the winter, presumably to offshore marine habitats. Populations in the Bering and Chukchi Seas are believed to move south to stay ahead of the advancing pack ice.

During the summer breeding season Kittlitz’s murrelets are scattered throughout the coastal marine waters of Alaska and Russia ranging from Southeast Alaska to the Beaufort and Chukchi Seas, through the Aleutian Islands to the Sea of Okhotsk. Their breeding habitat is rocky treeless slopes and mountains, often associated with glaciers. Kittlitz’s murrelets forage during the summer months in the cold nearshore marine waters of their breeding areas.

Not much is known about the winter range and habitat preferences of Kittlitz’s murrelets. It is likely that the birds move offshore in Russia and Alaska during the winter months and seek out locations with abundant pelagic forage fish and zooplankton.

The current abundance of Kittlitz’s murrelets is not accurately known for most of its range.

The U.S. Fish and Wildlife Service determined that this species should be listed as threatened or endangered under the Endangered Species Act, but due to a lack of time and funds, designated the Kittlitz’s murrelet as a Candidate for listing. The basis for this ESA listing decision were reported declines of 38-84% in major population centers, including Prince William Sound, Glacier Bay, and Kenai Fjords. Recent studies suggest a stabilization of population numbers.

Possible threats to the Kittlitz’s murrelet include a decrease in prey availability, climate change, bycatch in fisheries, and oil spill contamination. There is some concern that this species may be competing with commercial fisheries for some of their prey species. There also may be changes in prey abundance or distribution due to climate change. Climate change may also impact their nesting habitat in positive or negative ways. Kittlitz’s murrelets are generally associated with glacially-fed or other turbid waters, which may change with receding glaciers and altered water flows. Kittlitz’s murrelets are also taken as bycatch in gillnet fisheries due to their foraging style which includes underwater wing pursuit of small fish. The magnitude of this threat is not well understood. This species is susceptible to marine-based oil spills since it spends significant time on the water’s surface.

The Kittlitz’s Murrelet is currently listed as a Candidate species under the Endangered Species Act and protected by the Migratory Bird Treaty Act which are implemented by the U.S. Fish and Wildlife Service. As a sovereign entity, the State of Alaska retains trust responsibilities over this species and is actively engaged in the management, conservation, and regulation of the Kittlitz’s Murrelet and its habitat.

The Alaska Department of Fish and Game has supported and led several recent and ongoing Kittlitz’s murrelet research projects.