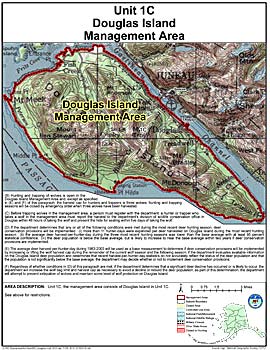 Restrictions: A. Hunting and trapping of wolves is open in the Douglas Island Management Area and, except as specified below, the harvest cap for hunters and trappers is three wolves; hunting and trapping seasons will be closed by emergency order when three wolves have been harvested;
B. before trapping wolves in the management area, a person must register with the department; a hunter or trapper who takes a wolf in the management area must report the harvest to the department's division of wildlife conservation office in Douglas within 48 hours of taking the wolf and present the hide for sealing within five days of taking the wolf;
C. if the department determines that any or all of the following conditions were met during the most recent deer hunting season, deer conservation provisions will be implemented:
&nbsp1. more than 11 hunter-days were expended per deer harvested on Douglas Island during the most recent hunting season;
&nbsp2. the average deer harvest-per-hunter-day during the three most recent hunting seasons was lower than the base average with at least 95 percent statistical confidence;
&nbsp3. the deer population is below the base average, but is likely to increase to near the base average within two years if deer conservation provisions are implemented;
D. the average deer-harvest-per-hunter-day during 1983 - 2003 will be used as a base measurement to determine if deer conservation provisions will be implemented by increasing or lifting the wolf harvest cap during the remainder of the current wolf season and the following season; if the department evaluates available information on the Douglas Island deer population and determines that recent harvest-per-hunter-day statistics do not accurately reflect the status of the deer population and that the population is not significantly below the base average, the department may decide whether or not to implement deer conservation provisions;
E. regardless of whether conditions in (D) of this paragraph are met, if the department determines that a significant deer decline has occurred or is likely to occur, the department will increase the wolf bag limit and harvest cap as necessary to avoid a decline or rebuild the deer population; as part of this determination, the department will attempt to prevent extirpation of wolves and maintain some level of wolf protection on Douglas Island