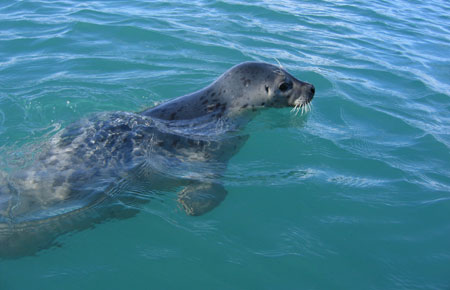 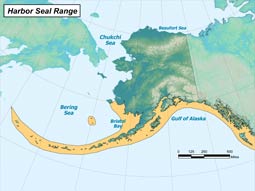 Thanks to their sensitive whiskers, good vision does not seem to be essential to harbor seal survival; scientists have found blind but otherwise healthy individuals, including mothers with pups, at sea.

Harbor seals (Phoca vitulina), are “true seals” of the Phocidae family, also sometimes called “common” or “hair” seals. They are covered with short, stiff, bristle-like hair. Coloration varies, but two basic patterns occur: light gray sides and belly with dark blotches or spots, or a dark background with light rings. They can be distinguished from other pinnipeds, such as fur seals and sea lions, by the absence of external ear flaps; only a small hole (the external pinnae, or opening to the ear canal) is visible on either side of their head. When on land, harbor seals move awkwardly by undulating in a caterpillar-like motion because their pelvic bones are fused, preventing them from moving their hind flippers under their pelvis to walk. In the water they are graceful and efficient swimmers, using their fore flippers as rudders and their hind flippers for propulsion by clasping both hind flippers together, splaying webbed toes and moving the large hind flippers side to side.

Harbor seals weigh about 24 pounds (11 kg) at birth and gain weight rapidly during a month-long suckling period; perhaps doubling their weight. They can reach five to six feet (1.5-1.8 meters) in length. Average weight for adults is about 180 pounds (82 kg); males are somewhat larger than females and can weigh up to 285 pounds (129 kg).

Harbor seals are well adapted to life in the sea. They are able to dive to depths up to 1640 feet (500m) and can remain submerged for over 20 minutes, although most dives are less than 65ft (20m) and less than 4 minutes long. Oxygen-conserving adaptations that allow such dives include high blood volume, reduced peripheral circulation, reduced heart rate, and high levels of myoglobin (oxygen-binding protein in muscle).

Harbor seals haul out of the water periodically to rest, give birth, and nurse their pups. In winter seals spend up to 80% of their time in the water. In spring and summer they spend more time hauled out during pupping and molt season. Harbor seals molt annually, usually in summer; timing of molt depends upon sex and age class.

In Alaska, single pups are born between May and mid-July. Young pups are able to swim almost immediately after birth. They normally remain with their mothers about one month, after which they are weaned and separate from their mother. At that time over half their body weight may consist of fat, providing them a head start on self-sufficiency. Sexual maturity occurs at between 3 and 7 years. Mature females mate shortly after weaning their pups. Development of the embryo is suspended for about 11 weeks; a trait called embryonic diapause (i.e., delayed implantation). Active fetal development is about 8½ months. Births of harbor seal pups are not restricted to a few major rookeries (as is the case for many species of pinnipeds) but occur at many haul-out sites. The sex ratio of harbor seals at birth is approximately equal and remains so until about 5 years of age. Thereafter mortality rates for males are higher, and females become relatively more abundant. Maximum ages estimated from annual rings in their teeth are 26 years for a male and 35 years for a female.

Harbor seals show variable movement patterns depending on their sex and age class, with some exhibiting considerable localized travel, but no seasonal patterns, while others show more extended movements, particularly during the winter.

Harbor seals are usually solitary in water, but haul out in groups of a few to thousands. When they are in the water and not feeling threatened, they are inquisitive but elusive, often surfacing close behind boats. Because they move awkwardly on land, when they are hauled out they are quick to enter the water if they feel threatened, even when aquatic predators are present.

The harbor seal, is a widespread species in both the north Atlantic and Pacific oceans, and is found in Alaska along the coast extending from Dixon Entrance north to Kuskokwim Bay and west throughout the Aleutian Islands. Reefs, sand and gravel beaches, sand and mud bars, and glacial, pan ice, and sea ice are commonly used for haul-out sites. Harbor seals are sometimes found in rivers and lakes, usually on a seasonal basis (present in summer, absent in winter). At Iliamna Lake, seals are present year-round and are probably resident.

Most harbor seals that use terrestrial sites are closely associated with nearshore coastal waters (<25 km from land); however, there have been a few cases of seals making trips to the continental shelf margin (50-100km offshore). Seasonal use of glacial fjords, where many females aggregate to give birth on icebergs in the spring and summer, is common. Satellite tagging studies have shown that pups born at glacial sites may range up to 232 miles (374 km) from their birth site, although most movements are less than 62 miles (100km) away. Juvenile seals can make more extensive movements of up to 186-310 miles (300-500 km) away from their tagging location; however, most remain within 100km. Adult seals typically make shorter movements and on average are found within 37 miles (60km) of their tagging site. More recent studies of seals that occupy glacial fiords have revealed movements of seals from one glacial fiord to another as well as one extensive movement of a juvenile female seal from Glacier Bay in southeastern Alaska to Prince William Sound, an estimated straight-line distance of ~ 520 miles (830 km); that seal returned to Glacier Bay the following spring. As more seals are being satellite-tagged, much more information is becoming available about winter and summer movements.

The total Alaska harbor seal population is estimated at approximately 141,000 in non-glacial sites and approximately 15,000 in glacial fjords. Harbor seals are difficult to census because they can only be accurately counted when they are hauled out. They haul out at different times of the day at thousands of locations in Alaska; both at terrestrial sites and on glacial ice calved from tidewater glaciers. During any survey, some seals are in the water and not available to be counted while others are hauled out, but the proportion of the total population hauled out at any given time is unknown and must be estimated. One way to arrive at this estimate is to radio tag seals in the area, prior to conducting a survey. When the survey is conducted, the proportion of radio-tagged seals that are not hauled out provides a correction factor to estimate the total seal population (e.g., if 3 of 10 tagged seals were not hauled out, an additional 30% would be added to the count of seals hauled out to estimate the total population).

Harbor seals are listed as an Alaska Species of Special Concern. A Species of Special Concern is any species or subspecies of fish or wildlife or population of mammal or bird native to Alaska that has entered a long-term decline in abundance or is vulnerable to a significant decline due to low numbers, restricted distribution, dependence on limited habitat resources, or sensitivity to environmental disturbance.

Dramatic declines in harbor seal numbers have been documented in Alaska, including a decline from approximately 11,000 seals to 1,000 seals during 1976-1988 on Tugidak Island near Kodiak – a site previously considered to host one of the largest concentrations of harbor seals in the world. That decline resulted in the listing of Alaskan harbor seals as a species of special concern by the Marine Mammal Commission. A 63% decline in harbor seal numbers also occurred in Prince William Sound during 1984-1997. Although seal numbers in the Kodiak area have been steadily increasing since the early 1990s and seal numbers in PWS began to stabilize and show signs of increase in 2002, both populations remain severely depressed compared to pre-decline population levels. Similarly, a greater than 65% decline in seal numbers has been documented in Glacier Bay since the early 1990s. Seals in Glacier Bay continue to decline at a precipitous rate despite conservation measures in place to control vessel traffic, commercial fishing, and subsistence harvest. The declines and lack of substantial recovery of some harbor seal populations in Alaska contrasts sharply with other parts of the world, where the species has proven to be resilient and capable of fairly rapid recovery from perturbations. There is no evidence that movements of seals between areas can explain these declines; the cause is unknown, but multiple factors are likely involved. Harbor seals appear to have responded severely to changes in carrying capacity and therefore may be particularly sensitive indicators of future change, such as ocean warming.

The most common predator of harbor seals is the killer whale. Other predators include sharks, sea lions, land predators such as wolves, bears and coyotes, and bald eagles may take newborn pups. Since implementation of the Marine Mammal Protection Act in 1972, hunting has been restricted to Alaska Natives.

Harbor seals play a crucial role in the culture and diet of Alaska Natives; the annual subsistence harvest of harbor seals in Alaska is about1,800 to 2,900 animals, with fewer seals harvested in recent years. The harbor seal's ability to damage or remove salmon from gillnets has caused conflicts between seals and commercial fishers in Alaska. This behavior creates economic losses for fishers and often fosters an antagonistic attitude toward seals. The Copper River Delta, the mouths of the Stikine and Taku rivers, and portions of Bristol Bay are areas with notable harbor seal-fishery conflicts. Sometimes seals are caught and killed or injured in fishing gear, primarily in gillnets and occasionally in crab pots.

Harbor seals are a highly visible species and a popular sight on wildlife-viewing tours, especially those that occur in glacial fjords. Because of a diet comprised of fish, many of which also have commercial value, resource use by harbor seals often involves interactions with commercial and sport fishing industries in Alaska.

Even if approached by a marine mammal:

How to Observe Marine Mammal Behaviors and Minimize Your Impact

While viewing marine mammals, your actions should not cause a change in the behavior of the animals. Individual animal's reactions will vary; carefully observe all animals in the vicinity. Assume that your action is a disturbance and cautiously leave the vicinity if you observe behaviors such as these:

Harbor seals are vital to traditional/subsistence use for Alaska Natives. Their meat, organs, and oil from their blubber are important parts of the diet of many Alaska Natives. Their hide is used to make many items of clothing and handicrafts. The annual subsistence harvest of harbor seals in Alaska is about 1,500 to 2,900 animals, with fewer seals harvested in recent years.

Harbor seals are managed by the National Marine Fisheries Service (NMFS), a branch of the National Oceanic and Atmospheric Administration. The species falls under the jurisdiction of the Marine Mammal Protection Act. 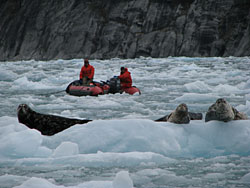 The ADF&G Marine Mammal Program conducts many research projects on harbor seals to increase our understanding of harbor seal ecology and to investigate factors that may be contributing to the decline of some harbor seal populations in Alaska. See the Harbor Seal Research Projects page for a list of current/recent projects and details about each project.