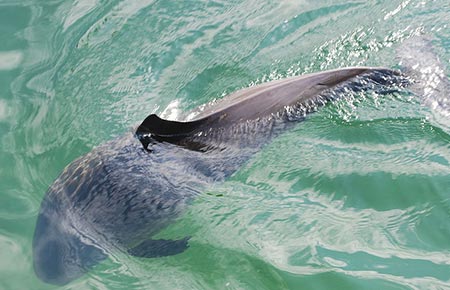 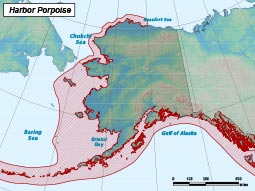 The word “porpoise” is derived from the Latin porcus for “pig” and piscus for “fish. It is sometimes referred to as the “puffing pig” or “herring hog”.

The harbor porpoise (Phocoena phocoena) is a marine mammal in the Phocoenidae family. The phocoenids are small cetaceans with relatively small flippers and no prominent beak.

The harbor porpoise is a small cetacean whose body is stocky through the midsection and then tapers towards the tailstock. It has a blunt snout and a small mouth that tilts upward and contains 22 to 28 small, spade-shaped teeth on each side of the upper jaw and 22 to 26 on each side of the lower jaw. Its flippers are small, oval and rounded at the tips, and its dorsal fin is wide-based, low and triangular in shape and located just behind the center of the body. The flukes are small and curved, and have a median notch.

The maximum length of a harbor porpoise is 6ft. (1.9m), but the average size is closer to 5ft. (1.5m) with a weight of approximately 130 lbs. (60kg). The females are slightly larger than the males.

Its body is dark grey or dark brown on top and then fades to a lighter grey on the sides. The throat and belly are white and there may be grey streaking on the throat as well as a dark chin patch. The flippers are darkly colored and there is a dark stripe that extends from the flippers to the eye.

The harbor porpoise reaches sexual maturity at three to four years of age and the females can give birth every two years. After a gestation period of approximately 11 months, females give birth to calves that weigh 14–22 lbs. (6.4–10kg). The calves are nursed for eight to 12 months. The life span of a harbor porpoise is typically eight to 10 years, but they can live to be 20 years of age.

The harbor porpoise feeds on schooling fishes such as cod, herring, pollock, sardines, and whiting, as well as squid and octopus. They usually feed individually consuming approximately 10% of their body weight each day.

Harbor porpoises are often seen alone, but at times form small groups of less than ten individuals. They are shy animals and rarely show curiosity towards vessels and at times will actively avoid them. The harbor porpoise will occasionally “porpoise” out of the water, but generally they surface to breathe in a slow, gentle roll. Diving for an average of four minutes, they are frequent and shallow divers, although they have been observed diving to depths of up to 200 feet.

Harbor porpoises inhabit shallow, coastal temperate and subarctic waters of less than 60°F (15°C). They inhabit the North Atlantic, Arctic and North Pacific Oceans and the Mediterranean and Black Sea regions. In Alaska, harbor porpoises are found from Point Barrow, along the Alaska coast (including the Aleutian Islands) down through Southeast Alaska. Harbor porpoises are often found in fjords, bays, harbors, estuaries, and large rivers, usually with depths of less than 300 feet, but will occasionally travel to deeper offshore waters in the winter.

Harbor porpoises are hunted for meat and oil in a range of areas.