Tips on Sexing Goats in the Field

For a most people, determining the sex of goats in the field is a difficult task. It is legal for hunters to harvest a goat of either sex, but for management reasons the Alaska Department of Fish and Game urges hunters to target males. If fewer females are harvested by hunters the productivity of the goat herd can be maintained. A stable or increasing herd means more hunting opportunities in future years. The following information can help you learn ways of distinguishing the sex and age of goats by using several different characteristics.

Body size can be used to sort kids, yearlings, and adults. Kids are easily recognized by their small size, weighing only about 35 lbs. and standing 20'' at the front shoulder. Yearlings weigh about 60-70 lbs. and stand about 27'' at the shoulder. Once an animal is older than two years they are extremely hard to discern from other adults. Adults billies average about 150 lbs., but may weigh up to 300 lbs. They can also be distinguished from a distance because they are larger and stockier than nannies. Adult females average about 125 lbs. and can reach a maximum weight of 250 lbs. Body size alone can not be a reliable indicator of a goat's sex, since in some groups of goats an old female can be the largest goat in the herd.

How to Judge Sex and Age by
Horn Size and Appearance

Horn lengths are approximately the same in male and female goats of the same age. Kids have only short buttons up to one inch long during their first fall. By the time a goat reaches the yearling age class, it has attained over half its expected horn length. Most yearling goats have horns about six inches long, which at a casual glance look much like adult horns. Although goats live to be ten years old or older, the annual horn growth increments are frequently less than 1/10 inch after the fourth year.

It is extremely difficult to estimate a goat's horn length in the field, since in most cases we are talking about an inch. In the Boone and Crocket Club record book the top ten record billies all had horns longer than 10 inches. One tool a person can use to compare the length of a goat's horn to the length of the ear. Generally an adult goat's ear is about six inches long. So, an ear length and one half should equal a 9-10" horn length. Goat's two years old and older will have horn lengths longer than their total ear length. 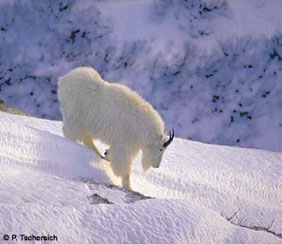 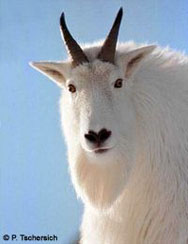 Brooming will also affect the total length of a goat horn. Most billies that are four years old or older show evidence of brooming (or the wearing down of the tip of the horn). Two eleven year old billies which were harvested on Kodiak during the 2000 fall season differed by over an inch (8 ¾ inches versus 10 ¼ inches) because of the wearing down of tips of the horns.

Since horn length is essentially indistinguishable from a distance, other horn characteristics can be used to distinguish the two sexes. Males have thicker horns, with a greater basal diameter and greater diameter along the entire length of the horn. Female horns are thinner and more spindly.

Horn curvature also differs significantly between most males and females. Males exhibit a smooth, even curvature throughout the entire length of the horn, while females exhibit the greatest curvature near the tips. Most female horns seem to make an abrupt curve about 2/3 of the way to the tips.

Comparing the width of the base of horn with the width of a goat's eye, probably provides one of the best ways to distinguish the sex of mature goats. Mature billies will have bases which are greater than the width of his eye. Even the oldest nanny will have horn bases equal to or less than her eye width.

You can practice your sexing technique by looking at pictures of hunters with their trophies on the web or in hunting magazines. Before reading the fine print on the bottom of the picture, guess whether it's a billy or nanny by comparing horn characteristics. 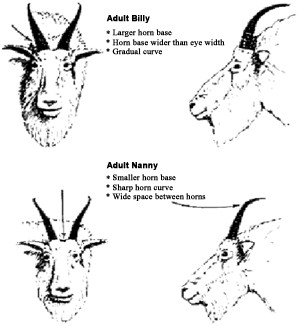 By getting close enough to use horn characteristics to identify a goat's sex you accomplish two things; first, you reduce the chance of taking a female by mistake and second, you will greatly increase your chances of a clean kill because you have reduced the range. Impatient hunters that take long shots have a higher risk of wounding loss, carcass and horn damage from falls, and self injury from trying to recover a kill from steep terrain.

Goats are frequently seen in groups of varying sizes. Groups larger than three or four animals are usually made up of kids, adult females, and immature goats of both sexes. The likelihood of adult males being with these groups increases in November as breeding season approaches. During most of the year adult males are more frequently found as solitary animals or in small isolated groups. If you see a lone animal bedded on the edge of a 2,000 foot cliff, chances are good it's a mature billy. If adult males are found with larger groups of goats, look for them on the edge of the group. After a few minutes of careful observation, it usually becomes apparent which are females and which are males.

Goats usually have only one kid, but twins sometimes occur. If you see a nanny with three or more kids you can bet that the rest of the group is on the other side of the ridge. Although either sex may be legally taken, hunters are encouraged to select animals other than females with kids. Biologists suspect that orphan kids have a significantly reduced chance of survival during their first winter. Mountain goats generally have lower productivity than other game animals because of high mortality of kids and yearling animals. Maintaining a high number of mature females is desirable for good management of goats.

Another way to distinguish the sex of a goat is the urination posture. Males stretch their hind legs backward, slightly flexing and barely splaying their legs to the side. Billies often will have a yellow stained patch of hair on their hindquarters. The patch becomes more evident around the end of September and can be observed clearly from a good distance away. Females squat to urinate, partially raising their tails and usually do not any stains on their hindquarters. 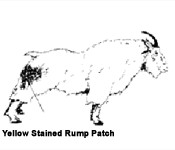 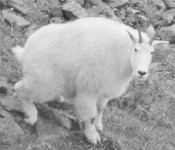 The longer you watch a goat the better your chances for gathering enough clues to determine its sex. Mountain goats use cliffs as escape cover much like a deer running into thick brush when they are spooked. A hasty decision to shoot may result in wounding or losing an animal because you can not retrieve it from the bottom of a crevasse. Once a billy is identified, most seasoned goat hunters will wait until the goat is away from any dangerous terrain in which the animal might hang up or fall after the shot. Goats are creatures of habit and if a hunter is patient to observe a goats feeding habits they will find out that goats generally come off of the cliffs to feed early in the morning and late in the afternoon. By not rushing your shot, a hunter has an increased chance of taking a large billy, which sometimes have a reputation of appearing when you least expect them.