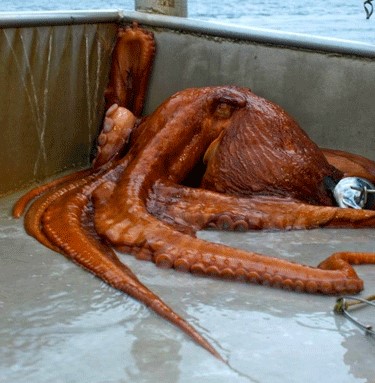 The Giant Pacific Octopus is in the mollusk Phylum Mollusca including snails, clams, chitons; and the Class, Cephalopoda including squid, cuttlefish and nautilus.

One of about eight species of octopus found in Alaska, the Giant Pacific Octopus is the largest octopus species in the world. It is the most-often encountered octopus species in Alaska. The Giant Pacific can be pale grey to dark red depending on the use of the layered chromatophores (pigment cells) that enable it to change color. Like many octopus species E. dofleini also has the ability to change the texture of its skin allowing it to blend into structural components of the environment. The octopus has a bulbous mantle where most of its organs are located. Their parrot-like beak is made of keratin and is the only hard part of their body. An octopus can squeeze through any hole large enough to accommodate its beak - A 50-pound octopus can fit through a two-inch hole. Octopus ink is a sepia color and is used as a defense mechanism. When threatened, E. dofleini, release a jet of ink into the water creating a screen of ink to confuse and limit their predators' view.

The Giant Pacific Octopus weighs 22 to 110 pounds (avg. 45-65 pounds). A 156-pound animal was recorded by Canadian researchers. They have a relatively short lifespan and achieve this weight in about five years. The adult octopus arm length can span up to 16 feet (note they are called arms, not tentacles). The suction discs on the arms are quite effective and octopus have been able to unscrew the lids of jars - from inside the jar.

The Giant Pacific Octopus spends most of its life in solitude; it seeks out a mate near the end of life. The males pass a spermatophore into the female's mantle during mating, he dies a few weeks later. About 40 days after mating, the female will find a rocky den and lay up to 100,000 eggs in long strands. The female stays with the eggs, guarding them from predators, keeping them clean, and aerated for up to six months (the time period needed to hatch). The female fasts while attending to her eggs and slowly starves, she dies about the same time the eggs hatch. At hatching the young octopus are about the size of a grain of rice and float as plankton (paralarvae) near the ocean surface for weeks or several months (water temperature is a factor) before settling on the ocean floor and developing a more octopus-like appearance. The lifespan of E. dofleini is thought to be 3-to-5-years.

Octopus seek shelter and protection in crevices, holes and "dens." Shells and debris from feeding accumulate on the sea floor outside dens and divers can sometimes locate dens by these middens.

Octopuses are curious and active; responding to stimulus with complex and diverse movements such as lunging at fish, patterning their actions when predators are near, and responding to the attention of others. Octopuses are the only invertebrate group named in the Cambridge Declaration on Consciousness as having the neurological substrates of consciousness. Octopus have the greatest brain-to-body-size ratio of any invertebrate. Giant Pacific octopuses are commonly kept on display at aquariums due to their size, interesting physiology and public appeal. Captivity research has helped to link feeding, prey preference, and habitat selection to behavioral responses. Identified behaviors include shooting water and moving towards caretakers, changing body texture, as well as other consistent behaviors regarding diet preference. There is evidence that captive octopus recognize individual people and treat different people differently. They have the ability to solve simple puzzles, open childproof bottles and use shells and stones as tools. They are known to escape tanks and aquariums, and also to return after forays. With more people spending time in the oceans through SCUBA diving, underwater photography, and aquarium observations, the understanding of octopus behaviors and intelligence is increasing.

The Giant Pacific Octopus is carnivorous; its diet includes shrimp, crab, scallop, clam, lobster, fish, and soft bodied prey. They have been known to scavenge larger fish and birds. They have excellent eyesight.

Giant Pacific Octopus ranges throughout temperate waters of the Pacific Ocean (ranging south from southern Baja California and north to Alaska, west to the Aleutian Islands and then south again to Japan). The Enteroctopus dolfeini occurs from the shallow subtidal to 3,280 to 4,921 feet depth in the southern regions of its range and from the intertidal to at least 328 feet in the northern regions.

Octopus are eaten by virtually everything that can catch them, including sea lions, seals, fish, birds, and people.

The Giant Pacific Octopus is considered a delicacy and is also used as fishing bait. Octopus, like squid, collectively contribute to a 2.5-million-ton harvest in worldwide fisheries; creating interest in developing the commercial harvest in Alaska. Octopus has accounted for approximately 35,000 pounds of annual bycatch during the Lower Cook Inlet cod fishery. Octopus are generally caught using a string of pots or traps on a groundline, similar to long-line fishing. They can be caught in unbaited pots because they seek shelter in cavities.

Based on the solitary nature and lack of detailed information about the Giant Pacific Octopus population; there are currently no management actions or restrictions. While they are not believed to be threatened, they are sensitive to pollutants. Learning the biology and ecology of other species of octopus may help guide future research and management decisions for the Giant Pacific Octopus.