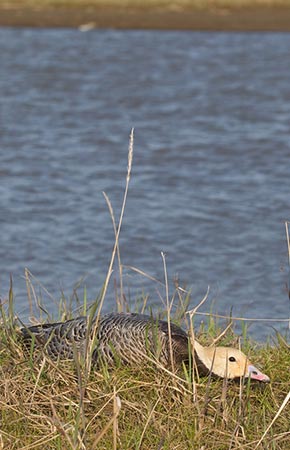 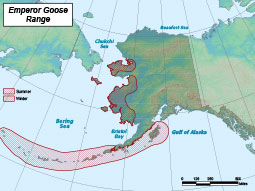 Emperor geese tend to fly low, close to the ground or the water.

Emperor geese are monogamous breeders and mate for life. Emperor geese do not mate until they are three years old. They nest on the tundra within 10 miles (16 km) of the coast, they tend to lay four or five eggs. Female emperor geese incubate the eggs for about 24 days. Both male and female tend the precocial young, which can fly at about 60 days of age. Mortality can be high for goslings.

Emperor geese eat a variety of marsh plants and berries in summer and fall, in winter they rely on seaweeds, crustaceans, and mollusks. The tend to dabble when feeding, often favoring coastal ponds and marshes.

Lifespan: Up to 25 years in captivity, about 12 years in the wild.

The emperor goose is largely endemic to Alaska with a limited range in Western and Northern Alaska, but their range also includes portions of Eastern Russia.

The major nesting grounds for emperor geese are along the coastal fringe of the Yukon-Kuskokwim Delta, with some nesting occurring along coastal areas of Northwest Alaska and eastern Russia. Unlike some arctic-nesting geese that migrate thousands of miles between summer and winter areas, emperor geese migrate a few hundred miles to wintering areas in the Aleutians, along the Alaska Peninsula, and the coast of Kodiak Island. A few stragglers have been found wintering as far south as California and Hawaii.

In 1964, survey counts by the US Fish and Wildlife Service (USFWS) indicated the population was approximately 140,000 birds; these counts declined to 42,000 birds by 1986. The population decline occurred for unknown reasons, but likely due to high adult mortality and periods of low productivity. Subsequent conservation efforts (fall-winter harvest was closed in 1986 and subsistence harvest ceased in 1987) promoted a slow but steady increase to a survey count of 98,000 birds in 2015.

Since harvest closure, the population increased about two percent per year on average. Per the Emperor Goose Management Plan a resumption of harvest could be considered when the most recent three-year average survey count was reached 80,000 birds, as it did in 2015 (81,875 birds). The fall-winter and spring-summer subsistence hunts were resumed in 2017.

A permit hunt is authorized for emperor geese in Alaska during the fall-winter period, with a statewide quota of up to 1,000 birds. A permit allows an annual limit of one goose per hunter. A spring-summer subsistence hunt of emperor geese is authorized as a customary and traditional hunt.

Emperor geese are managed by the U.S. Fish and Wildlife Service and the Alaska Department of Fish and Game.