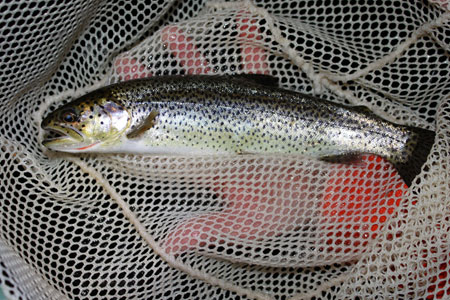 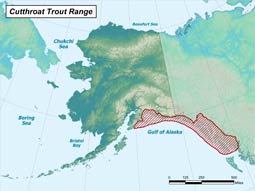 Coastal cutthroat trout occur as sea-run or freshwater-resident forms in streams and lakes along the coastal range from lower Southeast Alaska to Prince William Sound and are the most common trout species in the region. The freshwater-resident form lives in a wide variety of habitats, from small headwater tributaries and bog ponds to large lakes and rivers. Sea-run cutthroat trout are usually found in river or stream systems with accessible lakes, mostly south of Fredrick Sound. In some watersheds, like the Taku River, the two forms are found together. The extent of breeding between the two forms is unknown, and the reason that some fish migrate to sea while others stay in fresh water remains an interesting question.

Juveniles are 1–6 inches long and silver or yellowish to olive in color, with about 10 oval parr marks overlain with small black spots. Some juveniles will have a faint red or pink coloration along the lateral line and on the gill covers. The characteristic red or yellow slashes under the jaw begin to develop when a juvenile reaches approximately 3–5 inches in length.

Lack of distinct slash marks in sea-run and lake-resident forms has led anglers to confuse these fish with rainbow trout. Cutthroat trout can most often be positively distinguished from rainbow trout (though with difficulty) by the presence of minute teeth between the gills behind the base of the tongue.

Spawning occurs from April to early June and typically takes place over gravel beds in small isolated headwater streams, although they have been observed spawning in deeper rivers and in gravely upwelling areas of lakes. The selection of these small isolated streams likely results in less interaction with the more aggressive offspring of steelhead trout and coho salmon. Fecundity (number of eggs per female) varies with size and locality, but is typically less than 1000 eggs per female. Once the eggs are deposited and fertilized, they remain in the gravel for 6–7 weeks before hatching. Newly-hatched cutthroat trout remain in the gravel living on the contents of their yolk sac for an additional 1–2 weeks prior to emerging as free-swimming juveniles. Once emerged from the gravel, juvenile cutthroat trout will disperse to more ideal rearing habitats such as ponds, lakes, and backwater areas.

Unlike Pacific salmon, cutthroat trout are capable of spawning multiple times during their lives, but they rarely survive to spawn 3 or more times. Depending on food availability, adults may skip a year or two between spawning events.

In lake-resident forms of the coastal cutthroat trout, juveniles typically employ a sit-and-wait feeding strategy. These fish will find shelter such as lily pads or logs and wait for passing prey such as insects or small fish. Once the lake-resident forms reach a larger size (14 inches or more) they often take on a more active, cruising strategy and will chase down small fish along drop-offs and vegetation lines. Lake residents usually grow to the largest size among the various forms of this species in Alaska.

Homing appears to be very precise. Cutthroat trout can return to spawn in the same tributary stream where they emerged and reared years before.

Over-wintering migrants, as well as lake residents, often select lakes and ponds to feed and wait out the winter, while stream-type residents frequently spend the entire year within relatively-small sections of a given stream. While in fresh water these fish prefer deeper pool habitat and cover, such as that formed by woody debris and undercut banks.

For sea-run coastal cutthroat trout, time spent in salt water is typically just a few months but can extend for over a year in some cases. While in the marine environment, cutthroat trout prefer estuary and near-shore environments for feeding and cover.

Throughout its range the coastal cutthroat trout is experiencing population declines, though the threats, and therefore the declines, are more sever in the southern portion of its range. Due to lack of widespread, long-term stock assessment throughout Alaska, it is difficult to assess population status and trends.

In the Alaskan sea-run populations where long-term trend information is available, the population trends are declining, though for some monitored lake-resident populations, the status appears to be stable.

The lack of long-term information on population trends makes it difficult to determine the true status of the species within Alaska, however with increasing harvest rates and urbanization and its associated environmental impacts, we can expect that these populations will show signs of downward trending.

Coastal cutthroat trout are a popular sport and subsistence fish throughout their range. The flesh is light pink and makes a delicious meal either pan fried or on the Bar-B-Q.

The Alaska Department of Fish and Game (ADF&G), along with a variety of federal land management entities are responsible for the management of the coastal cutthroat trout. Beginning in 1994, the board of Fish (BOF) began implementing a suite of regulations including size restrictions, bag limits, bait restrictions, and seasonal closures designed to preserve Alaska’s populations of coastal cutthroat trout. 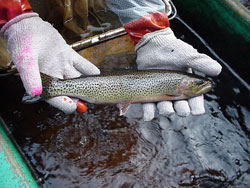 ADF&G has undertaken several monitoring projects designed to track population trends in Southeast Alaska, although many more projects of this type are needed in order to provide the information needed by managers to confidently design and implement management plans.

There are several opportunities for direct public involvement in management of the coastal cutthroat trout. You can get involved by submitting either a proposal or a petition to the board of fish.