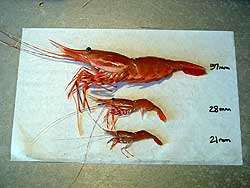 Spot shrimp are widely distributed within the North Pacific Ocean. They occur from the intertidal to depths of greater than 1,500 feet, from the Korea Strait to the Sea of Japan, along the Siberian east coast, and from Unalaska to San Diego, California.

All pandalid shrimp are protandric hermaphrodites; they mature and spawn first as males, and subsequently transition to females and spawn as females for the remainder of their lives. Spot shrimp are thought to mature sexually after 1.5 years and to reproduce as males for one or two seasons in British Columbia 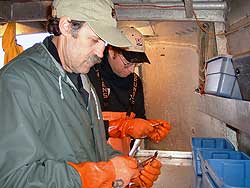 A stock assessment program has been developed to support management. This includes fishery-independent pot surveys in 4 of 19 management units; Tenakee Inlet, Hoonah Sound, Ernest Sound, and Cordova Bay. Collectively these surveyed areas account for approximately 38% on average of the annual harvest of the fishery. Six to nine longlined strings of pots are set on each of four days per area. The locations of these strings are the same year to year, thus giving an annual index of shrimp abundance without spatial bias. 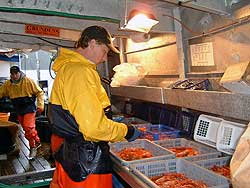 Sorting shrimp during the fall survey.

The results of the survey are combined with fishery dependant data including commercial catch sampling (both dockside and on the fishing grounds), logbooks, and fish ticket data. Statistical tests are done on catch rate (survey, logbook and commercial), shrimp size, the size at which 50% are female (L50), and on harvest rate estimates from depletion modeling of logbook. The current season’s data are compared with the long term baselines, and recent year’s values and scored to designate a stock status of “Good”, “Above Average”, “Moderate”, “Below Average”, “Poor”, or “Unknown”. A confidence rating is also determined for each stock status based on the proportion of actual to possible data pieces. These test results and scores are assessed by managers with the advice of research staff to set the GHL for the following season. 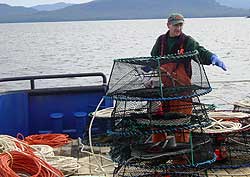 Setting up a string of pots to be deployed.

1 “Pot shrimp fisheries in Southeast Alaska harvest primarily spot shrimp, Pandalus platyceros, with generally less than 5% of the harvest comprised of other species of shrimp. Harvest levels established for these fisheries are based on averages of past historical catch records. In some areas these levels of harvest may prove unsustainable for a variety of reasons, including unrealistically large catches from virgin populations of shrimp and changes in the environmental conditions affecting shrimp survival. In other areas these levels may prove to be too low due to low levels of effort during years used to establish the harvest levels. Accurate estimates of size composition and relative abundance are necessary to evaluate current harvest levels, establish sustainable exploitation rates, and assess the abundance and stock condition of spot shrimp in key harvest areas. This project was initiated to develop, evaluate, revise, and establish stock assessment survey protocol and analytical methods to estimate size composition and relative abundance of spot shrimp in Southeast Alaska. 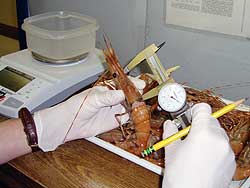 Measuring and sexing a spot shrimp Pandalus platyceros in the laboratory. 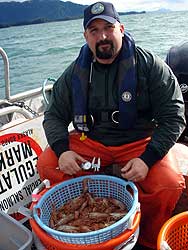 Preparing to sample shrimp from a commercial catch.

The data collected during dockside sampling are used to generate catch size frequencies, and size at sex metrics by fishing location for the commercial pot shrimp fishery. This data is used in the management plan for the fishery, and is useful for evaluating year class cohorts.

While actively managing the fishery, managers take samples from commercial catches for establishing fine scale catch size frequencies, and size at sex information to assist in examining fishing pressure and setting harvest levels for the fishery.