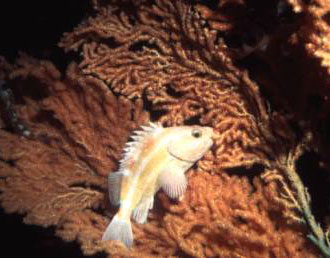 The reauthorized Magnuson-Stevens Fisheries Conservation and Management Act (Sustainable fisheries act of 1996) have a mandate to identify, conserve, and enhance essential fish habitat (EFH). The Act identifies EFH as, in part, the substrate necessary to fish for spawning, breeding, growth and maturity. The pinnacle area provides habitat for all these purposes for a variety of species and is extremely productive, in part due to its physical oceanography. Closure of this area has allowed a vital habitat to maintain populations at natural levels in an area surrounded by heavy fishing pressure. Because baseline information has already been collected on the habitat and the associated fish populations, it is possible to monitor the changes in diversity, distribution and the abundance of organisms.

The area surrounding the pinnacles has been an important fishing ground for halibut, salmon, and rockfishes. In the late 1980s several fishermen began to target the pinnacles for yelloweye rockfish using bottom longline gear. In 1987 a directed fishery for lingcod began (Gordon 1994). The directed fishery used modified troll gear called dinglebar gear. This gear is very effective at catching lingcod and operates by bouncing a lead bar along the bottom and trailing leaders and jigs to attract fish. By early 1991 some lingcod fishermen discovered that lingcod congregate at the tops of the pinnacle during early summer and began aggressively targeting this area. The small size of the area, large density and feeding behavior of the fishes make them susceptible to fishing pressure. Hourly catch rates of lingcod at this site exceeded catch rates of the surrounding area by three-fold (ADF&G confidential Logbook data). Several management actions were taken regarding the commercial fishery in this area. The pinnacles are in federal waters. The State of Alaska has management authority over lingcod and demersal shelf rockfish in both state and federal waters. In 1991, as part of a larger winter closure to protect nest-guarding male lingcod, the Alaska board of Fisheries closed all harvest of lingcod from December 1 – April 30 in the waters from cape Edgecumbe to Biorka Island, which includes the pinnacles area There have been several conservation closures in the area beginning in 1992. In 1997 an emergency order (EO) was issued that prohibited all retention of groundfish by commercial fisheries in a four square mile area that included the pinnacles. This emergency order was reissued for 1998.

The Alaska Department of Fish and Game (ADF&G) petitioned the Alaska Board of Fisheries (BOF) and the North Pacific Fisheries Management Council (NPFMC) to enact a bottomfish reserve for the pinnacle area. The petition was to close a 3.1 mi2 (8.1 km) area to all bottomfish and halibut fishing (including commercial, sport, charter, bycatch, and subsistence) and anchoring to prevent localized over fishing, protect nursery habitat provided by rock outcrop and invertebrate epifauna, and to create a bottomfish refuge. This closure protects the fragile nature of this rare habitat, and prevents the harvest (including bycatch) of lingcod and rockfish during critical portions of their life history.

The authority to establish a marine reserve in southeast Alaska is complicated by the various jurisdictions of state and federal agencies. The pinnacles occur in federal waters but some of the species inhabiting the area are managed by the state of Alaska.

Once it was determined that there was interested in creating a marine reserve for groundfish, the Division of Commercial Fisheries began garnering support for the reserve. Various scientists and biologists involved in research and management of groundfish in the area were contacted and asked to review the proposal. Public meetings were held to discuss the idea with local users of the area and other interested public. A small group of scientists, managers and fishermen were taken on submersible dives of the pinnacle area as part of an education process. Videotapes of these dives were shown at a variety of public meetings. Once agency and public support for the reserve was established, the ADF&G moved ahead with proposals for official action. 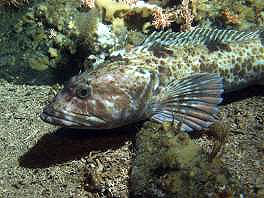 Adult lingcod (Ophiodon elongatus) use the top of the pinnacles as a seasonal feeding platform after spawning.

In Alaska, lingcod and black rockfish are not listed as groundfish species in the federal fisheries management plan. Consequently the state of Alaska has management authority over these species even in federal waters. Because the BOF would not be meeting to discuss southeast groundfish regulations for three years ADF&G submitted an agenda change request (ACR) that would allow the proposal to be addressed at an earlier BOF meeting. The ACR was submitted in October of 1997 and was proposed jointly by the Commercial Fisheries Division and the Sport Fish Division. BOF booklets were circulated for public review to allow for written public comments. Local advisory committees to the BOF reviewed the proposal. The Sitka Fish and Game Advisory Committee (which is comprised of representatives from the commercial fisheries, charter fisheries, subsistence fisheries, sport fisheries, conservation groups, hunters and the general public) unanimously supported the proposal. Several special-interest groups (both conservation and resource-users) submitted letters of support. In February 1998, after a public hearing to discuss this and other regulations, the BOF voted unanimously to establish the pinnacle reserve as a no-take area for all bottomfish species over which they had authority (currently lingcod, blue rockfish, and demersal shelf rockfish).

Concurrent with the effort to get the state to implement the closure, was an effort to have the NPFMC implement a companion closure for all other species including halibut. ADF&G submitted a proposal for the pinnacles reserve to the NPFMC’s Gulf of Alaska Plan Team at their August 1997 meeting. The Plan Team endorsed the proposal and it was forwarded to the NPFMC. In September of 1997 the NPFMC agreed to further consider the pinnacle reserve and requested a staff analysis be conducted. The draft Environmental Assessment and Regulatory Impact Review was released at the April 1998 NPFMC meeting. The preferred alternative listed in this document was to prohibit all fishing activities in the closure area, including trolling for salmon. During their June 1998 meeting in Dutch Harbor, Alaska the NPFMC adapted a plan amendment to prohibit boat anchoring and all fishing for groundfish, halibut, and scallops in the pinnacle area. This amendment originally was proposed by the ADF&G as a means to protect important habitat for rockfish and lingcod, and was later incorporated into the EFH amendment package. After reviewing the material, the council decided to separate the pinnacle closure from EFH provisions, and to adapt it as a separate amendment. In the future, the pinnacle area will be re-evaluated for consideration as a “habitat area of particular concern” under the EFH guidelines. An option for prohibiting recreational and commercial salmon fishing in the pinnacle area was considered, but not adopted.

The NPFMC was unable to close the pinnacles area to anchoring because anchoring regulations do not fall under their area of authority.

This is the first no-take reserve in the Gulf of Alaska. Although the area is relatively small in total area (3.1 mi2; 8.1 km2), it encompasses a wide range of depths and a variety of rock habitats. The margins of the closed area occur in water depths between 180 and 150 m; bottom habitat types include cobble, gravel, and lava flow. One pinnacle rises 70 m and the other 40 m.