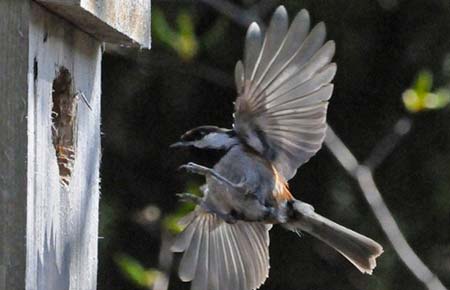 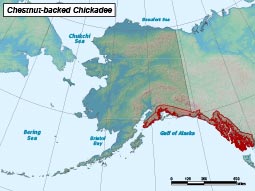 Though chickadee life expectancy is about 4 years, the oldest recorded chestnut-backed chickadee was 9.5 years old.

Active, acrobatic and agile with a perky cheerful air, the chickadee is one of the most widely recognized birds in Alaska forests. The chestnut-backed chickadee is one of four chickadee species that occurs in the state. It is the smallest of all chickadees and also has the shortest tail. It lives in the dense wet spruce/hemlock forests of coastal southeastern and southcentral Alaska. Sporting a dark brown cap and chestnut-brown back and sides, its common call is a rapid hoarse “tseek–adee–dee.”

Territorial during the breeding season, chickadees flock during the rest of the year. Small flocks made up of several adult pairs and unrelated juveniles are commonly seen from late summer through winter. Flocks of chickadees sometimes cross paths with kinglets, creepers, nuthatches and downy woodpeckers and form temporary associations. The birds usually roost in dense conifers but may also roost in cavities, under eaves of houses or other protected sites.

Chickadees are specially adapted to endure Alaska’s rugged winters. They have much denser, better insulating, plumage than other songbirds their size and a special ability to put on fat quickly. Birds burn fat like fuel to keep themselves warm in winter. A chickadee can put on eight percent of their body weight in fat each day. Chickadees are also able to drop their body temperature at night in order to conserve their winter fuel.

Pairs bond sometime during the winter flock period and begin to build a nest by late May. The nests are located in holes in trees although the chestnut-backed will readily use a nest box. Usually the female begins excavating the cavity with some assistance from the male. The nest itself is built of soft materials, like hair, fur, and a few feathers, on a base of dry moss. The female alone lines the nest while the male remains nearby. Egg laying, in clutches of one to 11 eggs, begins two or three days later.

Chickadees are very acrobatic as they glean insects, insect eggs and larvae from leaves, twigs, branches and bark. Most of their diet is caterpillars and eggs of moths, aphids, scale insects, beetles and other insects and spiders. They may pull the wings of moths and discard before eating the insect. Seeds and berries are also eaten and fat may be scavenged from animal carcasses. Like most chickadees, the chestnut-backed chickadee stores food regularly, a habit that is probably critical for winter survival. Studies show chickadees have an amazing ability to remember hundreds of hiding places.

Chickadees generally stick to their breeding range year round but periodic irruptions occur outside their range, usually during fall, winter and spring. Irruptions southward are probably related to food shortages. The birds may migrate short distances, moving higher into the mountains in late summer and back again when the snow flies.

Chestnut-backed chickadees are found in coniferous forests along the Pacific coast and also occur in some deciduous forests, particularly stream-side willow and alder stands. They are also commonly seen at backyard feeders.

The chickadee generally remains within breeding range throughout the year but periodically disperses during fall and winter. Flocks of six to 12 chickadees roam over winter feeding ranges of about 40 acres, regularly visiting known food sites. They normally return each evening to roost among a particular patch of trees though some find shelter in cavities, under the eaves of houses or other protected sites.

Long-term fire suppression has probably improved habitat for this species.

Clear cut logging may be detrimental, at least in the short term.