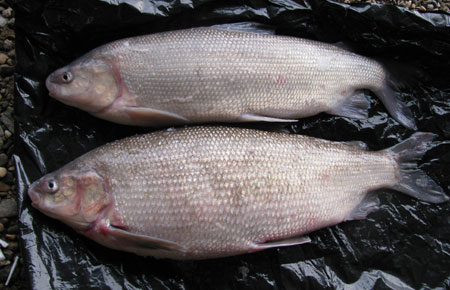 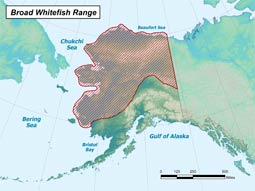 Broad whitefish are an important subsistence fish in Alaska.

Broad whitefish mature at a late age as compared to other salmonids (members of the salmon family). Most become mature between eight and ten years old. They live a long time; some reaching an age of 20+ years.

Broad whitefish are bottom feeders. They eat snails, bivalves and other mollusks, as well as aquatic insect larvae. It was noted that in the Kuskokwim River, broad whitefish do not eat at all between fall spawning and spring the following year.

Most broad whitefish are amphidromous, which means they are able to move from freshwater to nearshore marine waters and vice versa at various times in their lives. Some broad whitefish do not go to sea at all. We call them “residents.”

Most broad whitefish stay within a river system, but migrate between streams within the main drainage. They target small stream and lake systems for summer feeding. Whitefish begin their migration to fall spawning areas in mid to late summer depending on the distance they must travel. Some broad whitefish migrate downstream and into the sea in order to reach a prime freshwater spawning area. After spawning the fish will move to overwintering areas, such as deep pools or brackish water. In spring, broad whitefish migrate to feeding areas.

In Alaska, broad whitefish occur throughout the freshwater drainages of the Bering Sea (including the Yukon and Kuskokwim rivers) and drainages of the Chukchi Sea and the Arctic Ocean. Broad whitefish can tolerate some salt water, so they may also be found in the brackish waters of these systems. They are also found in northern, coastal systems of Canada and Russia.

The status of broad whitefish populations in Alaska is unknown.

Because we know little about broad whitefish life history, trends cannot be predicted.

Because broad whitefish migrate between streams and rivers, any development that blocks fish from moving up or downstream, such as inadequate culverts or dams, could be potentially harmful. Anything that changes salinity, pH, dissolved oxygen levels or temperature in waters used by broad whitefish in any stage of their life has potential to cause harm (e.g. Activities such as off shore oil spills, large scale in-river gravel mining or global warming.)

The broad whitefish is an important subsistence fish for people of the Arctic Coastal Plain as well as those that live within the Yukon and Kuskokwim river drainages. Along the northwestern coast, subsistence and commercial users harvest 20,000 to well over 30,000 fish between the spring and fall fisheries Broad whitefish are a preferred food fish in some communities across the north coast; preferred even over Dolly Varden (Salvelinus malma) in some communities. The majority of subsistence harvest occurs to the west of Prudhoe Bay in the Colville River, where a limited commercial harvest used to occur.

Currently, no agency manages broad whitefish in Alaska. Commercial havest is tracked, but not regulated. The U. S. Fish and Wildlife Service and the Alaska Department of Fish and Game are together working on a broad whitefish management plan.

Some research has been completed by Alaska Department of Fish and Game. The U. S. Fish and Wildlife Service conducted numerous studies on the Broad whitefish in Alaska. The U. S. Geological Survey also studied broad whitefish on the Arctic Coastal Plain. Most of the studies gathered baseline data. Still, very little is known about the broad whitefishes’ movements, reproduction, or population status in much of the State.

If you have concerns about broad whitefish or any other fish species in Alaska, you should attend your local advisory council meetings and Alaska Board of Fish meetings.