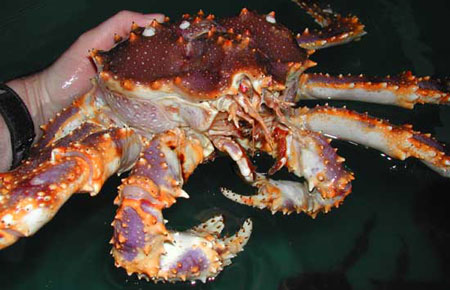 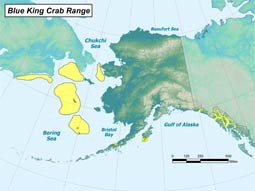 King crabs are not true crabs like Dungeness or snow crab, but are more closely related to hermit crabs.

Blue king crab, like all king crabs are decapod or “ten-legged” crustaceans that have "tails," or abdomens, that are distinctive, being fan-shaped and tucked underneath the rear of the shell. They also have five pairs of legs; the first bears their claws or pincers, the right claw is usually the largest on the adults, the next three pairs are their walking legs, and the fifth pair of legs are small and normally tucked underneath the rear portion of their carapace (the shell covering their back). These specialized legs are used by adult females to clean their embryos (fertilized eggs) and the male uses them to transfer sperm to the female during mating.

Blue king crab are similar in size and appearance, except for color, to the more widespread red king crab, but are typically biennial spawners with lesser fecundity and somewhat larger sized eggs. It may not be possible for large female blue king crabs to support the energy requirements for annual ovary development, growth, and egg extrusion due to limitations imposed by their habitat, such as poor quality or low abundance of food or reduced feeding activity due to cold water. Both the large size reached by blue king crab and the generally high productivity of the Pribilof and St Matthew island areas, however, argue against such environmental constraints. Development of the fertilized embryos occurs in the egg cases attached to the pleopods beneath the abdomen of the female crab and hatching occurs February through April. After larvae are released, large female blue king crab will molt, mate, and extrude their clutches the following year in late March through mid April.

Female crabs require an average of 29 days to release larvae, and release an average of about 110,000 larvae. Larvae are pelagic and pass through four zoeal larval stages which last about 10 days each, with length of time being dependent on temperature; the colder the temperature the slower the development and vice versa. Stage I zoeae must find food within 60 hours as starvation reduces their ability to capture prey and successfully molt. Zoeae consume phytoplankton, the diatom Thalassiosira spp. in particular, and zooplankton. The fifth larval stage is the non-feeding and transitional glaucothoe stage in which the larvae take on the shape of a small crab but retain the ability to swim by using their extended abdomen as a tail. This is the stage at which the larvae searches for appropriate settling substrate, and once finding it, molts to the first juvenile stage and henceforth remains benthic. The larval stage is estimated to last for 2.5 to 4 months and larvae metamorphose and settle during July through early September.

Longevity is unknown for the species, due to the absence of hard parts retained through molts with which to age crabs. Estimates of 20 to 30 years in age have been suggested.

King crabs are eaten by a wide variety of organisms including but not limited to fishes (Pacific cod, sculpins, halibut, yellowfin sole), octopuses, king crabs (they can be cannibalistic), sea otters, and several new species of nemertean worms, which have been found to eat king crab embryos.

Adult blue king crabs exhibit nearshore to offshore (or shallow to deep) and back, annual migrations. They come to shallow water in late winter and by spring the female's embryos hatch. Adult females and some adult males molt and mate before they start their offshore feeding migration to deeper waters. Adult crabs tend to segregate by sex off the mating-molting grounds. Red, blue, and golden king crabs are seldom found co-existing with one another even though the depth ranges they live in and habitats may overlap.

Blue king crab are anomurans in the family Lithodidae which also includes the red king crab Paralithodes camtschaticus and golden or brown king crab Lithodes aequispinus in Alaska. Blue king crabs occur off Hokkaido in Japan, with disjunct populations occurring in the Sea of Okhotsk and along the Siberian coast to the Bering Straits. In North America, they are known from the Diomede Islands, Point Hope, outer Kotzebue Sound, King Island, and the outer parts of Norton Sound. In the remainder of the Bering Sea, they are found in the waters off St. Matthew Island and the Pribilof Islands. In more southerly areas as far as southeastern Alaska in the Gulf of Alaska, blue king crabs are found in widely-separated populations that are frequently associated with fjord-like bays. This disjunct, insular distribution of blue king crab relative to the similar but more broadly distributed red king crab is likely the result of post-glacial period increases in water temperature that have limited the distribution of this cold-water adapted species. Factors that may be directly responsible for limiting the distribution include the physiological requirements for reproduction, competition with the more warm-water adapted red king crab, exclusion by warm-water predators, or habitat requirements for settlement of larvae.

No known threats at this time although there is concern for the continued low abundance of Pribilof Island blue king crab, despite no directed commercial harvest since 1999.

Historically, there has been a directed commercial harvest of blue king crab. King crabs are most commonly fished using pots, large 600- to 700-pound steel frames covered with nylon-webbing. Commonly, each pot is baited, with chopped herring, and then dropped to the water where it sinks to the bottom and is generally allowed to soak for one or two days when fishing red or blue kings, but longer when fishing for golden king crabs. Buoys attached to the pots with heavy line are retrieved and lifted onto the boat by use of powerful hydraulic systems. Boats fishing king crabs are 40-200 feet long. Those vessels fishing in the Bering Sea or Aleutian Islands average over 100 feet. Major blue king crab fishing grounds have been adjacent to the Pribilof and St. Matthew Island in the Bering Sea. Peak blue king crab statewide harvest and value were 14 million pounds and $32 million in the 1981/82 and 1983/84 seasons.

Management of blue king crab in the Bering Sea falls under the jurisdiction of the Alaska Department of Fish and Game and the National Marine Fisheries Service (NMFS), through the North Pacific Fisheries Management Council (NPFMC). Annual assessments of biomass of male crab are used to determine the sustainable harvest for the upcoming year. These assessments and determination of harvest levels are conducted by ADF&G and NMFS staff, and then reviewed and approved by the NPFMC. Harvests are managed via a rationalized fishery, where a share of the allowable harvest is allocated to harvesters, processors, and coastal communities.

Abundance of populations of blue king crab in the Bering Sea are assessed annually with a trawl survey, estimates of removals due to harvest and bycatch, and assessment models to annually determine the biomass of male crab. With abundance currently at low levels, there has also been research into the culture of blue king crab for the purposes of rebuilding populations.

There are several opportunities for direct public involvement in management of blue king crab fisheries. You can get involved by attending the regular meetings of the North Pacific Fishery Management Council. Users can testify in person or in writing at NPFMC meetings. In addition, stakeholders may review and submit written comments to the National Marine Fisheries Service on proposed rules published in the Federal Register. Users can also get involved with crab management through the state’s Board of Fisheries process.