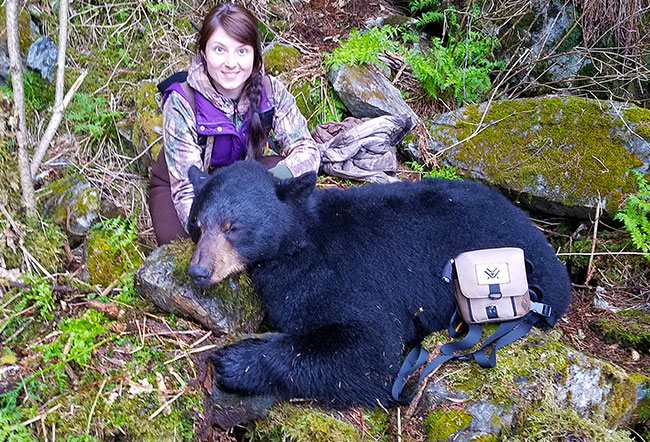 Anecdotal reports and harvest records suggest black bear numbers may have increased substantially during the last half of the 1990s in western Prince William Sound's Game Management Unit 6D. At the same time, the number of people visiting the sound increased. Black bear hunting- along with fishing and shrimping - is popular among Alaskans who flock to the region each spring. Bears are frequently harvested as they venture to coastal sedge flats to eat plants.

The improvement in sex ratios, success rates and increasing harvest suggests that the population is increasing. Research from ADFG and USFS is underway to learn more about this population. In the meantime, hunters are encouraged to select large male bears.

This figure shows the total black bear harvest (blue bars) peaked in RY 2007 and has since declined. This decline may be influenced by regulatory changes, but it may also be related to the increased proportion of females in the harvest (green line).

The Alaska Board of Game and the Department of Fish and Game have taken a series of actions to reduce black bear harvests. These changes include a restriction on shooting from a boat (2003), closing black bear baiting in high- and diverse-use areas (2005), and shortening the hunting season (2005 and 2009). Despite these changes, the harvest continued to increase until 2007 and the percentage of females harvested has continued to climb.

The Board of Game also changed the longstanding general season black bear hunt in Unit 6D to a registration hunt starting in the fall 2015 (RY 2015). Permits for the hunt will be available online and at any ADFG office. Hunters will have 30 days to seal bears, but will need to report harvests within five days of making a kill. This registration hunt will have a maximum allowable harvest level just as mountain goat and moose hunts do in many parts of the state. Once this harvest level is reached, the season will close. Season closure dates will depend each year on how many people go hunting and how many bears are available for harvest.

Hunters can help conserve Prince William Sound black bears by harvesting selectively. Black bears can appear deceptively large, so hunters are encouraged to do some homework before entering the field. Learn to identify and select adult male black bears only. Be patient, and don't shoot the moment a black bear is seen. A sow may stash cubs in a tree while she feeds. Taking sows with cubs is hard on the population and it's illegal. Take the time to select a mature boar.

It's Getting Crowded Out There

Opening the road to Whittier in June 2000 increased access to Prince William Sound. As a result, user conflicts — including competition for campsites among hunters, anglers and other recreational groups — are increasing.

Bear hunters must be responsible for safety and ethical considerations while hunting in areas shared with other users. Common sense and courtesy can go a long way toward preventing conflicts with others in Prince William Sound. Consider the following:

Increase Your Odds of Bagging a Prime Black Bear

Travel Safely in the Sound

Prince William Sound can be as treacherous as it is beautiful. It is important to learn boating safety, navigation rules, and weather. The Department of Natural Resources Office of Boating Safety has a useful web site specific to Prince William Sound. The U.S. Coast Guard teaches boating classes, and has a boating video for hunters available for viewing at some ADFG offices. The National Weather Service has weather and sea conditions available online including buoys, radar, and marine forecasts, or by telephone (907-424-3333).

It is a hunter’s responsibility to know where they are hunting and avoid trespassing on private lands. These include all or most of Latouche, Chenega, Fleming, Knight and Evans Islands, and smaller areas of Shotgun Cove, Whale Bay and Bainbridge Island. Contact Chugach Alaska Corp. (907-563-8866) for details and land-use permits. Other major land owners in Prince William Sound include the Village Corporations of Chenega, Tatitlek and Eyak.

For more information contact:
Charlotte Westing or Samantha Stevenson-Renner at (907) 424-3215 or via e-mail: