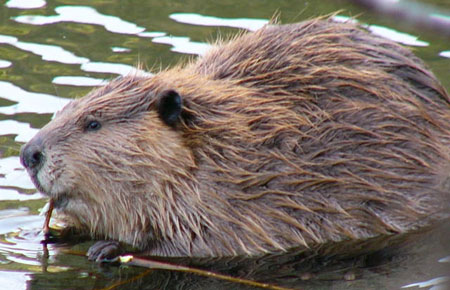 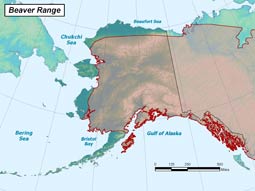 Beavers grow throughout their lives. Although they average 40 to 70 pounds, they can weigh as much as 100 pounds.

The beaver is North America's largest rodent. The beaver's scientific name is descriptive of the castor glands which are located near the base of the tail. Castor is a strong-smelling, oily substance that beavers use to communicate through scent marking. It also is attractive to many animals and has been used in trapping lures and as a base for perfume.

The beaver's heavy chestnut brown coat over warm, soft underfur keeps the animal comfortable in all temperatures. It has large, webbed feet and a broad, black tail (about 10 inches long and 6 inches wide or 25 cm long and 15 cm wide) that can be used as a rudder when swimming. When slapped against the water it serves as a warning, but it can signal other emotions as well. When the beaver stands up on its hind legs to cut down a tree, the tail is like a fifth leg used for balance.

The beaver is designed to swim and work under water. When submerged, nictitating membranes protect its eyes and its nose and ear valves close. A beaver also can cut and carry submerged wood without getting water in its mouth by drawing its loose lips tightly behind the protruding front teeth.

After mating (which takes place in January or February), the female prepares for a new litter. Two to four kits on average are born anytime from late April to June. Their eyes are open at birth and the kits are covered with soft fur. They can swim at 4 days and dive at 2 months of age. The young beavers live with their parents until they are 2 years old. Then they leave to find their own homes.

To survive, beavers must be assured of 2 or 3 feet (0.6–0.9 m) of water year-round. Water provides a refuge from enemies and a way to float and transport heavy objects such as branches and logs for food and construction. Food for winter use must be stored in underwater food caches during autumn.

If the habitat does not have the necessary water level, beavers construct dams. Each dam is a little different. A beaver may work alone or with family members to build a dam, using piled logs and trees secured with mud, masses of plants, rocks, and sticks. Although the average tree used for construction of a dam is 4 to 12 inches (10–30 cm) across the stump, use of trees up to 150 feet (45 m) tall and 5 feet (115 cm) across have been recorded. As the tree snaps, the beaver runs! Very large trees are not moved but the bark is stripped off and eaten. Smaller trees are cut into moveable pieces, dragged into the water for repairing dams and lodges. This work is done mainly in spring and autumn.

The den is used as a food cache, rearing area, and general home. Dens are of two types depending on water level fluctuations. Bank dens are simply dug into the stream or river bank with a mass of sticks, mud, and rocks constructed over the top of the den. Lodges are constructed of the same materials as bank dens, but are located where the water level is more stable and slower moving, like in a pond or lake.

Where streams are too large or swift to dam but do provide ample water throughout the year, the beavers may use bank dens. These may have several tunnel exits with at least one above the high water mark and another below the low water mark. The den itself is a large chamber averaging 2 feet wide by 3 feet long by 3 feet high (60 x 90 x 90 cm).

Bank dens and lodges have two things in common: they have one chamber-like room and at least one tunnel exit to deep water so it will be free of winter ice. The exit provides quick and easy access for food gathering and emergency escape from predators. Each year beavers will add materials to the lodge whether or not repairs are necessary. The same lodge is used by a beaver family year after year, so some can be quite large. It is the family's home year-round.

The life of a beaver colony is governed largely by food supply. Beavers eat not only bark, but also aquatic plants of all kinds, roots, and grasses. As they exhaust the food supply in the area, the beavers must forage farther from their homes. This increases the danger from predators. When an area is cleared of food, the family migrates to a new home. In Alaska wolves, lynx, bears, and humans are important predators of beavers.

The beaver is found throughout most of the forested portions of the state, including Kodiak Island where it was introduced in 1925.

Beavers are managed as furbearers. Beavers are considered to be common and abundant throughout their range in Alaska.

As beavers cut down small trees and clear away brush, they create new habitats that are ideal food patches for other animals. Waterfowl use these areas as feeding and nesting grounds. Ponds created by beavers often serve as fish habitat. Occasionally beaver dams may block streams to migrating anadromous fish, like salmon, and at times road culverts may be blocked or other human developments flooded by this industrious animal.

In the past, pelts were so important they were used as a trade medium in place of money. Between 1853 and 1877, the Hudson Bay Company sold almost three million beaver pelts to England. In Alaska today, trappers still harvest these furs. They are highly prized for cold weather coats and hats.

Beavers are also valued by wildlife watchers. They can become habituated to humans and carry on their normal activities, offering insight into their lives and behaviors. Their abundant signs – dams, fallen trees, lodges, chewed sticks and trails offer accessible wildlife experiences even if the animals themselves are elusive.