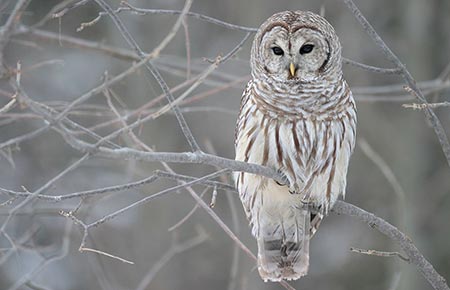 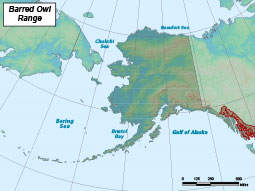 Barred owls will answer an imitated call, and even approach a caller.

This medium-sized owl is 16 to 25 inches long with wingspan of 50 to 60 inches. The barred owl has a round head with no ear tufts, an off-white facial disc with dark trim, and vertical streaking on its belly, hence the name. This is the "hoot owl" of southern American swamps, a vocal owl that calls year-round, but particularly during courtship where they participate in hooting duets back and forth. It responds to an imitation of the call (biologists can locate and monitor these owls using "hooting surveys," owls hoot back and even approach the caller.) A common mnemonic device for remembering the call is the phrase, "who cooks for you, who cooks for you all."

Pairs are monogamous and likely mate for life. They nest in cavities, often those created by woodpeckers. Incubation of the eggs is 28-33 days, young stay in the nest about 42 days. Birds are non-migratory and territorial, especially in nesting season.

Typically a perch hunter, the barred owl is an opportunistic feeder that takes a variety of small mammals including rodents, young hares, bats, mink, weasels, squirrels, birds and even large insects. Where available, eats lizards, snakes, frogs, salamanders, and crawfish.

Great horned owls prey on barred owls. The barred owl has been known to live 24 years.

In Alaska, it's found only in the forests of Southeast Alaska. The barred owl prefers deep woods. Originally native to the forest of the southeastern United States, over the 20th century the barred owl expanded its range westward and north, eventually moving into the Pacific Northwest, where it sometimes hybridizes with (but usually out-competes and replaces) the closely related but smaller and less aggressive spotted owl.

Barred owls were first heard in Alaska in the Juneau area in the mid-1970s and have since become established in Southeast Alaska. Juneau naturalist Bob Armstrong was there and shared the following account:

"One day in 1977 Frank Glass, a Juneau birder, sighted what would have been the first barred owl seen in Alaska. It was on a trail bordering Peterson Creek about a mile past the end of North Douglas Road near Juneau. To establish his sighting as an official record, Frank needed a photograph or a recording.

That evening at twilight I joined Frank in an effort to find the owl again and record its voice. We walked along the trail for about three hours periodically playing a recording of a barred owl, but we got no response.

Disappointed, we returned to the car and decided to play the recording one last time. The owl immediately answered us from a tree right next to the car. The recording was made and Frank's record was established."

Widespread and common in its range in North America.

Barred owls are not hunted. Owls in general are of interest to birders, but their nocturnal nature makes them more difficult to view than songbirds and other raptors.

Barred owls are protected under the Migratory Bird Treaty Act. Owls are managed by the U.S. Fish and Wildlife service.