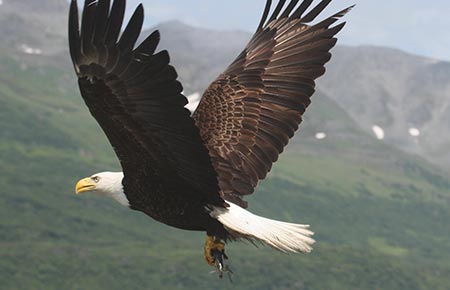 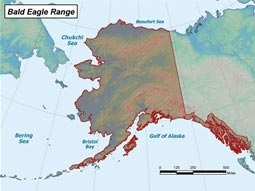 The bald eagle builds the largest nest of any North American bird, up to 8 feet across and weighing as much as a ton.

The bald eagle is named for the conspicuous white head of the adult bird. It was named by American colonists at a time when bald (or ‘balled’) meant white, not hairless. It takes about five years for the distinctive white plumage of both head and tail to gradually develop. Immature bald eagles are a mottled brown and white, and the young birds have a black beak as opposed to the adult’s yellow beak. As with many raptors, females are larger than males.

Found only in North America, bald eagles are more abundant in Alaska than anywhere else in the United States. The Alaska population is estimated at 30,000 birds.

These magnificent birds, recognized for their biological importance as scavengers and predators in the natural world, are much admired for their beauty. A national emblem of the United States since 1782, they have been a spiritual symbol for Alaska Natives far longer than that.

Juvenile bald eagles are often confused with golden eagles (Aquila chrysaetos). Where the two species coexist, the bald eagle is distinguished by a lack of feathers on its lower legs and a whitish lining on the forward part of its wings.

Bald eagles often use and rebuild the same nest each year. Nest trees are usually close to the water, allow for a clear view of the surrounding area, and often provide sparse cover above the nest. Nest building begins in April and both the male and female gather nest material, In late April, two (sometimes three) dull white or creamy yellow eggs are laid several days apart. Incubation lasts about 35 days. When the young hatch, sibling rivalry is common and the weaker, usually younger, chick is killed or starved. The surviving young leave the nest after about 75 days and do not attain adult plumage and breed for about 4 or 5 years. After the breeding season, bald eagles congregate where food is plentiful and they may continue to roost near the nest tree.

The bald eagle’s main diet is fish. Herring, flounder, pollock, and salmon are taken along the coast, while the Interior populations prey heavily upon salmon. Eagles also prey upon waterfowl, small mammals, sea urchins, clams, crabs, and carrion. Bald eagles are sometimes seen swimming, laboriously “rowing” with their wings. Eagles have thick down and float pretty well. It’s a common misconception that eagles cannot let go of their prey: the talons’ grasp is purely voluntary. An eagle will sometimes grab a fish that’s too heavy to lift and will chose to swim, towing the meal to shore, rather than lose it.

Accounts of eagles carrying off dogs and cats are unsubstantiated and highly unlikely. An eagle can lift about three or four pounds, more if it swoops down. Bald eagles are strong aggressive birds but like everything that flies, they are governed by aerodynamics. The wings of an eagle need to support the 8 to 12-pound bird as well as whatever the bird is carrying and best estimates put the lifting power of an eagle at about 4 pounds. That varies, however, depending on the circumstances. Lift is dependent on air speed as well as wing size. The faster a bird (or airplane) is flying, the greater the lift potential. An eagle that lands on the beach to grab a fish and take off is limited to a smaller load than an eagle that swoops down at 20 or 30 miles an hour and snatches up a fish. Momentum and speed give the bird the ability to carry more weight.

Alaska has the largest population of bald eagles in the United States, about 30,000 birds. Bald eagles are often found along Alaska’s coast, offshore islands, and Interior lakes and rivers. Most bald eagles winter in southern Alaska but some leave the state during cold months. In the Chilkat Valley, over 3,000 birds may congregate in late fall and early winter to feed on spawned-out salmon.

The highest nesting densities occur on the islands of Southeast Alaska where bald eagles usually nest in old-growth timber along saltwater shorelines and mainland rivers. Eagles in Southcentral Alaska nest in old cottonwood trees near water.

In 1917, the Alaska Territorial Legislature, in response to claims by the salmon industry and coastal fox farmers that eagle predation was competing with their livelihood, imposed a bounty on eagles. Though the claims were later largely discredited, the bounty system lasted for 36 years and led to the killing of a confirmed 120,195 eagles and undoubtedly countless more for which no bounty was paid. The bounty was removed in 1953 and with Alaska statehood in 1959, bald eagles in Alaska came under the federal Bald Eagle Protection Act of 1940. The act made it illegal to kill or possess an eagle, alive or dead, or to possess any part of an eagle, including feathers.

Bald eagles were endangered or eliminated throughout most of the Lower 48 states as a result of habitat destruction, illegal shooting, pesticides, and poisoning. Stronger protections, improved habitat and water quality have aided in their recovery, however, and in 2007 the bald eagle was removed from the list of threatened and endangered species.

Alaska’s populations remain healthy, but careful stewardship and conservation of nesting habitat and salmon spawning streams as well as the minimizing of human disturbances near their nest sites is necessary to protect them from potential harm caused by the spread of human development.

In 1972, the Alaska State Legislature established a stretch of the Chilkat River as critical bald eagle habitat in order to ensure protection of the large numbers that gather in winter. In 1982, a portion of the surrounding area was established as the Alaska Chilkat Bald Eagle Preserve.

Eagles are popular with wildlife watchers, and areas like the Chilkat River in fall draw visitors specifically for eagle viewing.

On August 9, 2007, bald eagles were removed from the federal list of threatened and endangered species and were therefore no longer protected under the Endangered Species Act. However, bald eagles remain protected under the Bald and Golden Eagle Protection Act (Eagle Act). The Eagle Act prohibits anyone from taking bald eagles. Among other actions, "take" includes disturbance of bald eagles. The U.S. Fish and Wildlife Service prepared the National Bald Eagle Management Guidelines to advise when and under what circumstances the protective provisions of the act may apply to activities on public and private lands and to help people minimize their impacts on the birds.