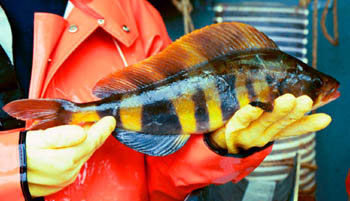 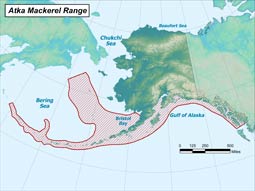 Atka mackerel Pleurogrammus monopterygius is a gregarious, semi-pelagic and semi-demersal hexagrammid that is distributed in the continental shelf regions across the North Pacific Ocean and Bering Sea from Asia to North America. On the Asian side their distribution extends from the Kurile Islands to the Gulf of Anadyrskiy. From Kamchatka, they extend eastward through the Komandorskiye and Aleutian Islands, north to the Pribilof Islands in the eastern Bering Sea, and eastward through the Gulf of Alaska to southeast Alaska. Their center of abundance is in the central and western Aleutian archipelago where a directed commercial trawl fishery operates. Atka mackerel is a key prey item for marine fishes, birds, and mammals, including the endangered Steller sea lion.

Atka Mackerel first appear in trawl surveys and the fishery at ages 2–3 and many survive to 14 years. Fifty percent of the female population is estimated to have reached maturity at 31 cm (about 3.6 years old). Atka mackerel migrate from the shelf edge to shallow coastal waters (5-30 m) to spawn. Spawning occurs in July -October along the Aleutian Islands. Eggs are adhesive and deposited in rock crevices. These nests are guarded by the males until hatching, which occurs about 40-45 days later. Atka mackerel are obligate demersal spawners. Females lay adhesive eggs on rocky substrate and males guard the nests to protect eggs against predation and cannibalism. Locations of spawning and nesting grounds within Alaska are unknown. The only published account of an Atka mackerel spawning site in Alaska is by Turner (1886). Turner (1886) noted that spawning Atka mackerel, when observed from the water’s surface, appeared to form several strata with the least mature fish in the top layer and spawning “vigorous males and females” in the bottom stratum. He reported that females deposited eggs on kelp and that both sexes remained for one month, from June to July, and then departed. Turner’s (1886) observations contradict the more recent accounts by Gorbunova (1962) and Zolotov (1993), who used scuba for direct observation of nesting grounds in Kamchatkan waters. Their observations of spawning and nesting sites were confined to coastal areas, and the minimum and maximum depths for spawning and nesting ranged from 10 m to 32 m. Both authors report that Atka mackerel were segregated by sex and size, that eggs were laid only on rocky substrates, and that males guarded nests for protracted periods lasting months. Bottom type, depth, and temperature along with moderate tidal current were reported as being important factors for a nesting site. The temperature range for nesting sites was between 5°C and 8°C. The Russian studies, however, were limited in scope both in terms of methodology and spatial coverage. Characteristics of nesting sites off the Kamchatka Peninsula may not be representative of nesting sites over the entire geographic range of Atka mackerel, and scuba has depth limitations that could have prohibited direct observations of nesting sites in deeper water.

The diet of Atka mackerel varies but is dominated by copepods and euphausiids.

The predominately pelagic behavior of Atka mackerel changes during spawning when they become demersal. During spawning they move from the edge of the continental shelf to shallow, nearshore waters, where they form dense spawning aggregations.

Atka mackerel range from the Kamchatka Peninsula in the west, through the eastern Bering Sea, and eastward through the Gulf of Alaska to Southeast Alaska. The center of abundance is in the Aleutian Islands. The predominately pelagic behavior of Atka mackerel changes during spawning when they become demersal.

The estimated biomass of Atka mackerel in the Aleutian Islands is at or near historic, post-1977 highs. Atka mackerel are not overfished nor nearing an overfished condition. In the 5-year period ending 2004 Atka mackerel harvest in federal fisheries has averaged almost 119 million pounds (54,000 mt) worth an average of almost $12 million (5-yr avg harvests, 2000-2004, historical harvests, 1977-2004). State-waters catches average less than one tenth of a percent of the federal catches. There was an average of 14 vessels in this fishery (5-yr avg harvests, 2000-2004).

Other fish, marine mammals and sea birds prey upon Atka mackerel. Like pollock and Pacific cod, Atka mackerel is an essential prey item for Steller sea lions. As a result, measures were implemented for the Atka mackerel fisheries in the BSAI that included prohibitions on trawling within specified distances from rookeries and temporal and spatial dispersion and reduction of fishing within sea lion critical habitat. Fishing effort has also been dispersed through management action to reduce the chance of localized depletions of Atka mackerel.

Fisheries for Atka mackerel evolved from strictly foreign fisheries in the 1970s, largely by fishermen from the U.S.S.R., Japan and the Republic of Korea. These were followed by joint venture fisheries with American catchers and foreign processing ships in the 1980s, and those were replaced by a wholly domestic fishery since 1990.

Fisheries for Atka mackerel take place primarily in federal waters of the Exclusive Economic Zone, although some harvest also occurs in state waters of the Aleutian Islands as a parallel fishery under the jurisdiction of the State of Alaska. Parallel fisheries conducted elsewhere in state waters, primarily for Pacific cod and pollock, also yield catches of Atka mackerel.

The directed fishery for Atka mackerel is conducted primarily with bottom trawls. This species may also be caught with jig gear (hook and line). According to federal regulations, jig fishermen may be allowed up to 2 percent of the quota for the Eastern Aleutian District and the Bering Sea subarea that is not allocated to Community Development Quota groups. The vast majority of the harvest is taken in depths shallower than 200m.

Information contained in this Profile derived from the following sources: