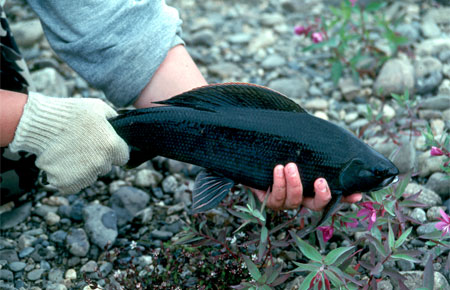 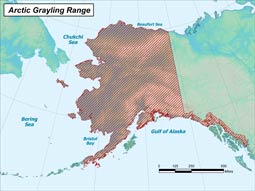 Arctic grayling may travel more than 160 kilometers (100 miles) in one year.

The Arctic grayling (Thymallus arcticus) is one of the most beautiful freshwater fishes of Alaska. Its most striking physical features are the large, sail-like dorsal (back) fin and colorful body markings.

The Arctic grayling comes in a wide array of colors. Coloration can vary from stream to stream. Their dorsal fins are typically fringed in red and dotted with large iridescent red, aqua, or purple spots and markings. These colorful markings are most dramatic on large grayling. Arctic graylings’ backs are usually dark. Their sides can be black, silver, gold, or blue. A band of gold forms a border between their sides and white bellies, which are in sharp contrast to their pelvic fins striated with iridescent orange, red, or pink. The sides of the body and head can be freckled with black spots. A black slash lies on each side of the lower jaw. The iris of their eyes is often gold in color. Only their adipose, caudal (tail), pectoral, and anal fins are without much color; typically dull and gray. Arctic grayling are larger and thicker than that of its cousins (salmon, trout, and char) and they sport a unique scalloped edge.

Arctic grayling spawn for the first time between the ages of 4 and 7 years and at a length of about 255 to 305 millimeters (~10 to 12 inches.) The eggs are about 2.5 millimeters (1/10 inch) in diameter and are slightly heavier than water, so they sink to the bottom; lodging in between pebbles and gravel. A female, depending on size, may have between 1,500 and 30,000 eggs. Because grayling live up to 32 years in Alaska, they may spawn many times during their life. Grayling fry hatch about three weeks after spawning and are akin to a short 13 millimeter (½ inch) piece of thread with two eyes. They immediately move toward the calm and warm shoreline waters where they grow quickly; reaching a length of 50 to 100 millimeters to (~2 to 4 inches) by the end of summer. They continue to grow quickly during the next 3 to 6 years until they become mature. At this point they begin to grow much more slowly as they dedicate more of their annual energy intake to spawning efforts. The largest Arctic grayling measured in Alaska was 610 millimeters (24 inches) long and weighed 2.3 kilograms (5 pounds 1 ounce.)

During the brief summer, Arctic grayling are voracious feeders. They will eat almost anything that moves, but drifting aquatic insects, especially black flies, mayflies, stone flies, and caddis flies are their primary food items. At times, grayling will gorge upon the eggs of spawning salmon, smaller fish, or terrestrial (land) insects that have fallen into the water. They may even eat an occasional vole or shrew! One grayling had seven shrews in its stomach. Another’s stomach contained 65 chum salmon smolt (small salmon heading to sea).

During winter, Arctic grayling feed minimally. They conserve energy by occupying lakes or the deeper, slow-current pools of medium-sized rivers such as the Chena and Gulkana, or in large glacial rivers like the Tanana, Susitna, and Yukon. Unlike many other fish, Arctic grayling can tolerate low dissolved oxygen levels (a common condition beneath the ice). This ability allows grayling to survive the long winters in areas where many other fish would die.

Arctic grayling have evolved many strategies to meet the needs of life in harsh and uncertain environments. Some grayling migrate. They take advantage of different streams for spawning, growing up, summer feeding, and overwintering. Other grayling may complete their entire life in only a short section of a single stream or lake.

You can find Arctic grayling of different sizes and ages throughout a whole river system. However, there is a discernable pattern of grayling sizes from a river’s headwaters to its mouth. The older, larger adults tend to lay claim to the cooler upper reaches of river and stream systems. The sub-adults occupy the middle. Juveniles live in the lower reaches of a river; warmer water in the lower river helps speed growth.

In the early fall, grayling begin to slowly migrate back to overwintering areas, which are typically downstream of feeding areas.

Throughout Alaska, most stocks of Arctic grayling are healthy and are isolated from most threats. Where development and Arctic grayling coexist, threats such as overfishing, road culverts, mining, agriculture, and forestry may impact the local populations. By diligently managing development, the threats to Arctic grayling can be minimized.

The upper Missouri River grayling population is a candidate for listing under the ESA. Some populations in Montana are listed as a “species of concern” by the U.S. Fish and Wildlife Service

The Arctic graylings’ insatiable appetite and wide distribution makes them a popular sport fish in Alaska; especially in the Interior. Because Arctic grayling have a tendency to eat almost anything, any fishing technique, including bait, lures, and flies, will work at one time or another. Fly anglers love to fish for Arctic grayling because of their willingness to rise to a dry fly.

The largest grayling fisheries occur along the road system in Interior Alaska. However, larger-size fish are generally caught in less heavily fished areas. The majority of trophy grayling (greater than 3 pounds) registered by the Alaska Department of Fish and Game have come from the Ugashik Lake and river system of Bristol Bay as well as river systems of the Nome area. The state record grayling, 23 inches long and weighing 5 pounds 1 ounce, was caught on the Seward Peninsula.

Grayling are often easy to catch, but, as with other species, the most skilled anglers with the best knowledge of grayling feeding patterns and how to fish the water will be most successful. Fly fishing techniques for grayling are similar to those used for any trout species. Generalized insect imitations such as the dry fly "Adams" and the "hare's ear nymph" are usually effective patterns for grayling. However, when feeding on a specific insect, grayling can be very finicky and the angler will be challenged to "match the hatch."

Subsistence users across the state harvest Arctic grayling. Some villages harvest only a few grayling as part of their subsistence needs, while others rely more heavily on the Arctic grayling catches to meet their food requirements for the year.

Other life history information can help biologists understand how development can affect Arctic grayling populations. For example, radio tagging Arctic grayling to track where they travel to and from can be used to ensure that culvert placement does not keep grayling from reaching spawning areas.

There are several opportunities for public involvement in management of Arctic grayling fisheries in Alaska. You can attend local fish and game advisory committee meetings and Alaska Board of Fish meetings. The Board of Fish accepts and considers regulatory proposals from all interested people and entities. You can contact the local area management biologist to ask questions and voice your concerns. Finally, all research publications by the Alaska Department of Fish and Game are available at area offices and online.

All anglers can contribute to responsible use of the public resource by following regulations, participating harvest surveys, and reporting illegal activities.