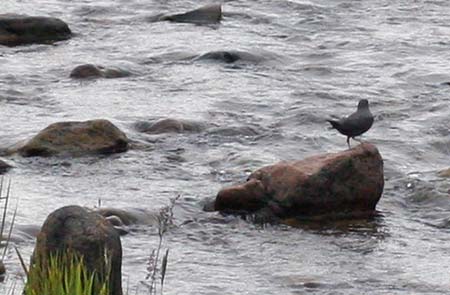 Dippers have the unusual habit of removing the lining inside their round mossy nest after the chicks have fledged.

The dipper, North America's only aquatic songbird, is one of only five species of dipper in the world. Formerly known as water "ouzels," dippers are named for their characteristic habit of 'dipping' or bobbing up and down while perched on a rock or ledge. This function is not well understood though some believe the action of dipping may help them spot prey beneath the surface of the water or help conceal their image from predators. Dipping may also be a form of visual communication between birds in the noisy environment they favor, which is a clear, clean, fast-moving stream.

A plain-looking medium-sized bird, the dipper is gray except for the upper eyelid which has tiny white feathers. It has a large head, long legs and short neck and tail. The immature dipper is similar to the adult but has faint pale barring on the underside. Males and females look alike, though the average body mass of males is greater than that of females (57g vs 51g in Southeast Alaska).

Dippers usually forage underwater, diving into the rapids and either walking along the stream bed gripping the bottom with their strong toes or swimming upstream with powerful strokes of their partially folded wings. They are well adapted to their cold watery habitat. They have a thick coating of down and feathers as insulation, large preen glands secreting oil to waterproof their feathers, a moveable flap over the nostrils that seals when the bird is underwater, blood with a large capacity for carrying oxygen, and an efficient internal system of thermoregulation.

Dippers are fiercely territorial, vigorously defending nesting territories from other pairs. They are socially monogamous in most cases and often return to the same nest year after year. The nest is a volleyball-sized shell of moss, with an inner saucer of dry grass and rootlets on which the eggs are laid. In Southeast Alaska, nest building usually begins in April or May though cold weather and high altitudes result in delayed nesting. By contrast, dippers in the Nome area have been noted nesting in July. Nests are customarily placed on cliff ledges or in little caves under boulder piles but dippers will also use old wooden dams and bridges that have horizontal ledges.

The clutch consists of 4 to 5 white eggs which are incubated for 2 to 2.5 weeks. Females do all the incubation but males bring some food to the incubating female. The female broods young chicks for a week or more while they are unable to regulate their body temperature. As the chicks grow, they grow feathers and can keep themselves warm. Both parents feed the chicks, bringing insects and small fish as many as 20 times an hour.

Parents remove the fecal sacs from young chicks but older chicks back up to the nest entrance to eject their feces. The chicks leave the nest in about 3.5 weeks and are fed by the parents for another two weeks as they gradually learn how to find and catch their own prey.

Dippers feed principally on aquatic larvae of insects like mayflies, mosquitoes, and caddisflies. They also eat dragonflies, worms, small fish, fish eggs, tadpoles and small shrimp-like crustaceans called amphipods. American dippers can wade, swim and dive from either the water or the air and are able to move rocks on the stream bed to get at food. They take prey from the water's surface while swimming or from mid-air while in flight. They will even use their wings to 'fly' underwater when chasing prey.

American dippers tend to be resident birds but if their stream freezes over in winter, they will fly short distances in search of open water in lower elevation streams.

Dippers are very hardy and able to tolerate winters even in the Brooks Range in far northern Alaska and the Seward Peninsula, Though rare residents of the far north, they are found in drainages where upwellings prevent water from freezing over in winter. Their range extends though mountain and coastal terrain southward from the Brooks Range through Southeast Alaska and out into some of the Aleutian Islands. Astonishing densities have been recorded in waterfall areas of southern British Columbia (13 birds in a 100 yard stretch of stream).

The American dipper is considered a species of Least Concern by the International Union of Conservation of Nature and Natural Resources; however, information is lacking on range-wide population trends.

Dippers are difficult to count in programs like the Breeding Bird Survey and the Christmas Bird Count so it's uncertain if their populations are stable, rising or falling.

Dippers are indicators of stream quality, because their aquatic prey becomes scarce in polluted streams. Sedimentation, acidifications and toxic wastes from industry of various types can cause reproductive failure and abandonment of stream. In addition, dippers accumulate heavy metals such as cadmium and lead in their bodies, which interfere with enzymes essential to the formation of hemoglobin (the oxygen-carrying molecule in the blood). Using dippers as indicator species requires more than knowledge of water quality, however, because more than one factor may cause population declines.