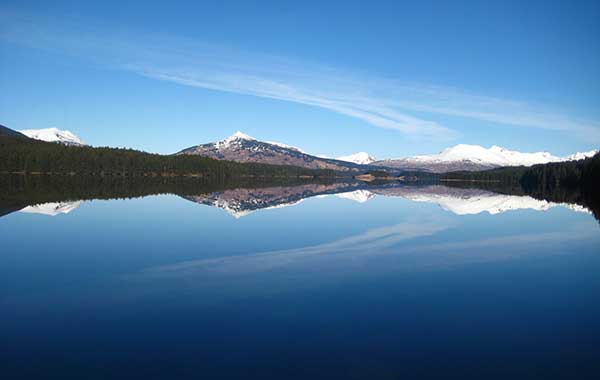 Whether one uses a net or a rod to fish, the Afognak Lake drainage, also referred to as Litnik, has always been a popular location among locals and visitors alike. Located on the southeast side of Afognak Island, approximately 31 miles from the town of Kodiak, it has traditionally served as a major producer of sockeye salmon for subsistence harvest for the villages of Afognak, Port Lions, and Ouzinkie as well as other Kodiak area residents. Sockeye salmon productivity peaked in the 1990s when the total run averaged 130,630 (1990–1999). Concerns arose in the early 2000s when sockeye salmon numbers dropped to less than half the numbers observed in the 1990s. Declining escapement levels for this valuable resource led to emergency closures and restrictions as well as increasing local concern. ADF&G responded with an intensive smolt and lake study starting in 2003, with the goals to assess sockeye salmon production and develop strategies to restore and stabilize Afognak Lake’s sockeye salmon run. 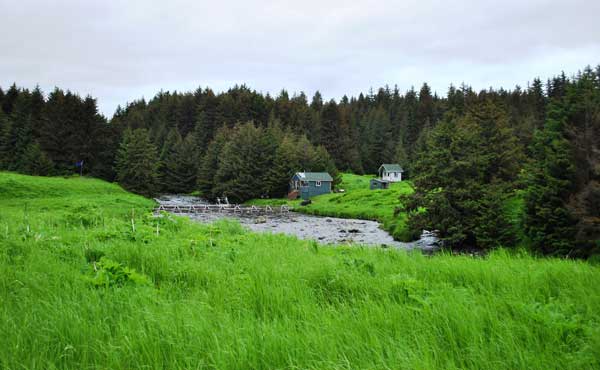 After emergence from their eggs, juvenile sockeye rear for 1 to 3 years in lakes before they become smolt and undergo physical and chemical changes as they prepare for their out-migration and ocean living. During these lake rearing years, juveniles feed on aquatic insects and zooplankton, whose production is driven by lake water conditions, or limnology, such as chemistry, nutrients, temperature, and light. Additional data collected during this critical growth period was needed to better understand juvenile sockeye salmon and the lake water in which they hatch and rear. In 2003, a comprehensive feasibility study was initiated at Afognak Lake, as previously sockeye salmon production was primarily assessed through adult spawners and harvest estimates.

After the success of this study, continued analysis of juvenile sockeye salmon and Afognak Lake was deemed of high importance by the US Fish and Wildlife Service Office of Subsistence Management, and further funding was provided to ADF&G for studies extending from 2004 through the present. The current project goals are to assess lake rearing conditions, assess the health of juvenile sockeye salmon, and evaluate adult returns. Not only are these data essential in determining stock production but also for future outlook for subsistence, commercial, and sport harvesters.

Sockeye juveniles forage in preparation for outmigration to the ocean.

To estimate the number of sockeye salmon smolt emigrating from Afognak Lake, a Canadian fan smolt trap is installed approximately 32 m upstream from the river terminus and operated from early May through early July. During this two-month period, the live box at the terminus of the trap is checked every 2–4 hours around the clock by ADF&G personnel. Juvenile salmon are removed from the live box where they are then identified by species and counted. Smolt are then released downstream from the trap or held in an in-stream holding box for either sampling or trap efficiency testing. 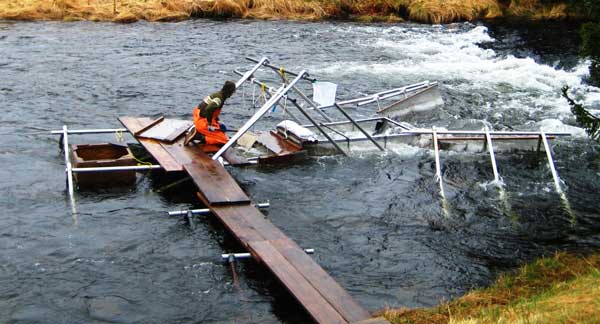 Weekly mark-recapture experiments are performed by temporarily marking a small percentage of smolt with Bismarck Brown Y dye then releasing them upriver to be identified when re-captured. This helps to determine what percentage of the outmigration the trap is catching and to estimate the total number of sockeye smolt that are ocean bound. Additionally, 2% of the total captured smolt are sampled daily to obtain age, weight, length, (AWL) and condition of smolt emigrants. Smolt studies of the Afognak Lake system continue to provide a better understanding of the overall sockeye salmon production while helping to determine escapement goals and forecast future run strength. 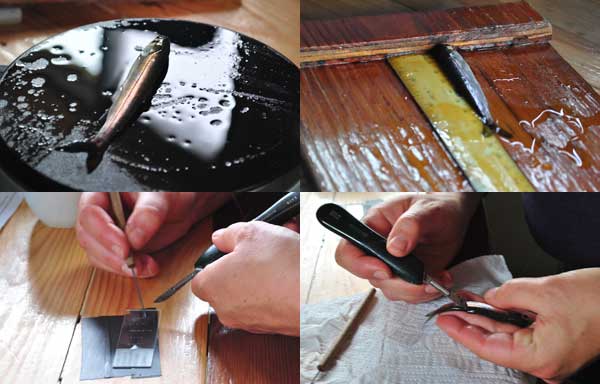 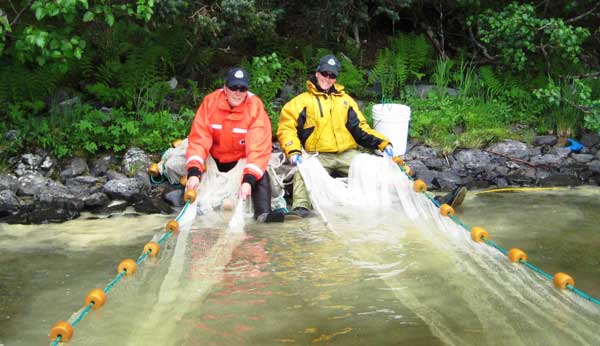 In order to further understand prey consumption and food energy transfer through the food web, lake rearing juveniles are collected every two weeks from mid-May through mid-September using a small mesh seine net. Juvenile sockeye salmon from established size classes are collected from 10 predetermined sites at both the lake shoals and mid-water locations. Samples are sent back to a lab in either Kodiak or Soldotna for evaluation of stomach contents or bioenergetic analysis. At the Kodiak Lab juvenile stomachs are carefully removed and examined under a microscope to determine specific diet and eating habits. Other samples are sent to Soldotna for bioenergetic analysis using a calorimeter to determine the energy density, or the amount of energy stored in each individual. Juveniles with a higher energy density will have a higher condition factor and will typically have a better chance of survival.

ADF&G personnel identifies and counts fish as they pass through the weir.

Adult sockeye salmon return to their natal rivers and lakes to spawn, thus producing the next generation of salmon. After they have survived numerous environments and avoided predation from various species including humans, they are considered escaped, hence the word ‘escapement’ is used to define salmon that make it to their spawning grounds. Enumeration of escaped adults by means of a weir is an essential responsibility of the ADF&G field crew at Afognak as well as daily estimation of salmon build-up below the weir, in the rivers, lagoons and bays. When the weir gate is manually lifted, all fish moving upriver are individually counted as they pass through the weir and across a white flash panel, which allows for accurate counts and species identification. The number of returning adults, or escapement, coupled with commercial, subsistence, and sport catch data, provides fisheries managers and researchers with an estimate of total adult sockeye salmon production within the Afognak Lake drainage. 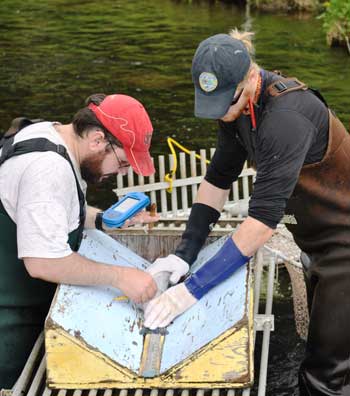 In an effort to evaluate lake conditions, limnological data is collected during open water periods from two different stations located in Afognak Lake. Samples are collected by ADF&G personnel by deploying a vertical tow net in the water column. These samples are then taken back to the limnology lab located in Kodiak to be analyzed for chemistry, nutrients, phytoplankton, and zooplankton. The microscopic zooplankton, which are forage food for juvenile sockeye salmon, are analyzed by taxa for density, biomass, and size.

Primary production within lakes is driven by temperature, sunlight, and dissolved oxygen, which affect nutrient cycling and concentrations, feeding the bottom of the food chain. Starting in 2010, light intensity and lake temperature were measured using a photosynthetic active radiation (PAR) meter and a temperature data logger, which recorded input every hour throughout the season to monitor environmental conditions that affect juvenile rearing habitat. 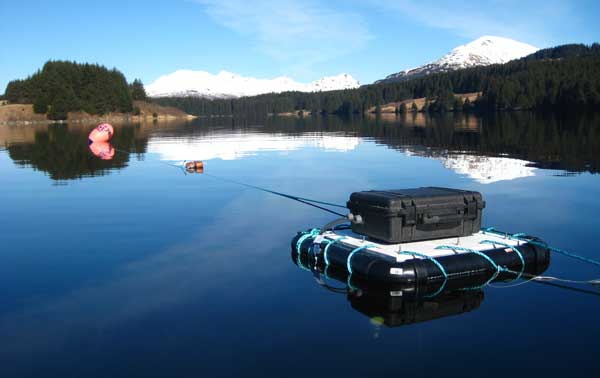 Data loggers hourly record light and temperature in the lake.

Traditionally, the Alutiiq people trapped salmon with log and rock barriers and then speared the fish with harpoons. As fish capture techniques improved over time, the Alutiiq people used nets to harvest salmon, thereby processing much larger quantities of salmon. Fish were preserved and stored for winter by smoking, drying, and salting, traditions still practiced today.

How do you say salmon in Alutiiq? 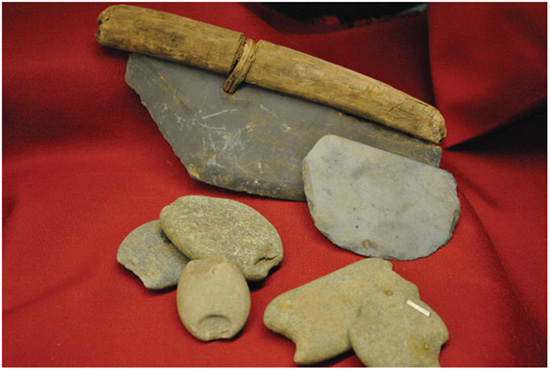 Descendants of Afognak Village are now a federally recognized tribe, the Native Village of Afognak. Village members and other local residents rely on Afognak sockeye salmon as a valuable food resource. Because Afognak Lake sockeye salmon are known as an important resource to the Alutiiq people and local communities in the Kodiak area, ADF&G has conducted smolt and lake studies, since 2003. These studies, in conjunction with an adult counting weir, will improve our understanding of sockeye salmon life history, so that we can develop strategies to sustain the Afognak Lake sockeye salmon stock well into the future. 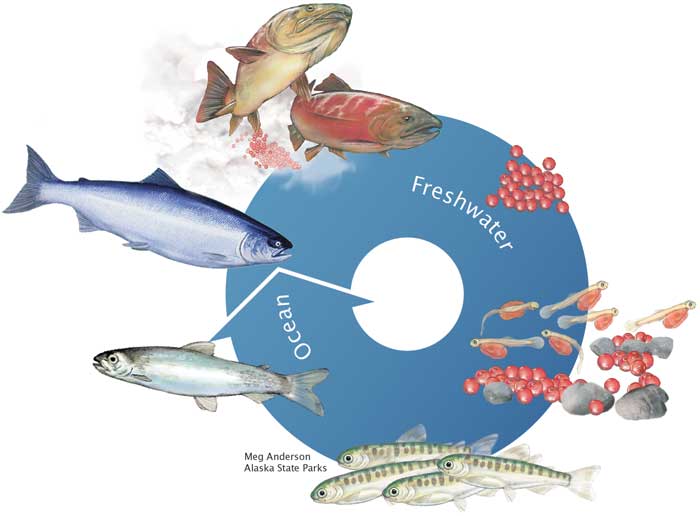 This summer, through a grant project, ADF&G staff will provide educational outreach about salmon studies to Kodiak residents and visitors. This project was partially funded by NOAA Pacific Coastal Salmon Recovery Funds administered by the Alaska Department of Fish and Game, Alaska Sustainable Salmon Fund.

In addition to collecting research data, ADF&G field personnel work in collaboration with the Native Village of Afognak and Afognak Native Corporation during the Dig Afognak summer subsistence camp. Participants in the camp visit the Afognak weir to learn the role ADF&G has in helping to sustain and manage the resource that has been so valuable to the Alutiiq people for thousands of years. Visitors receive hands-on learning by participating in a salmon dissection, fish identification, weir counting, and learning the gravel-to-gravel life cycle of all Pacific salmon. In return, ADF&G personnel visit the Dig Afognak camp and receive the opportunity to speak with the Native Elders, learn Alutiiq language and observe the traditions of harvesting salmon and marine mammals. 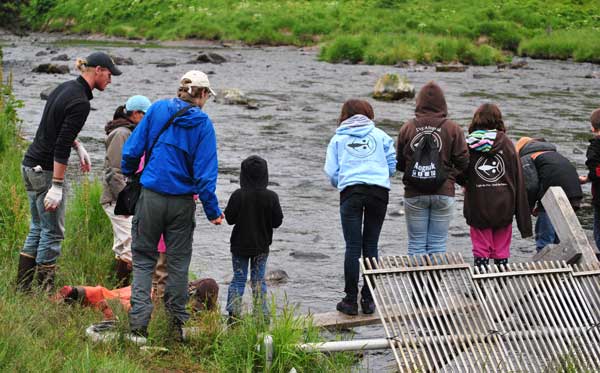 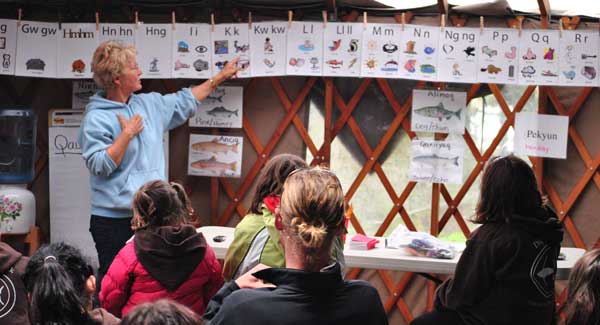