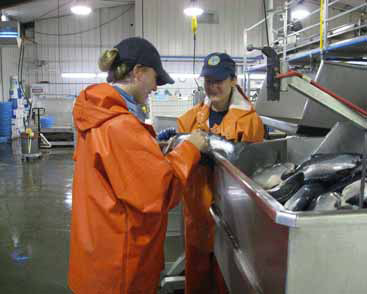 Age, sex, and length (ASL) data of salmon from the Kodiak Management Area (KMA) weirs have been collected since the mid 1920s. In 1985 an expanded sampling program emerged that included both escapement and commercial harvest (catch) sampling. Sockeye salmon became the focus of sampling. This change allowed for the collection of more representative data from major sockeye salmon systems and catches, and continues to expand the information in the ASL database. The collected samples are used to evaluate and predict future salmon runs, employ age marker analysis, conduct scale pattern analysis, and estimate which salmon systems most contribute to and affect commercial fishing in the KMA. The samples provide the foundation for salmon run predictions and escapement goal evaluation.

Sockeye salmon sampled are measured from the mid-eye to the fork of the tail because of the sexual differences in snout size with the onset of maturity. One scale is taken from a standardized location above the lateral line on the left side of the fish (see photo above). The scales are placed on sticky gum cards and later pressed under heat to leave an impression on an acetate card. This permanent record of the scale is aged under a microfiche using high magnification. A circular pattern of growth is laid down on the scale as the fish grows. Growth during the summer is present as widely spaced circuli. Winter growth is slow and is identified by closer spacing of the circuli. These characteristic winter circuli create a record of each year of life and are known as the annulus.

Sockeye salmon typically spend one to two winters in freshwater and from one to three in the ocean. Growth in freshwater is more limited than the productive marine environment, thus the central portion of the scale contains the most closely formed circuli. The outer portion and majority of the scale are made up of the wider spaced circuli of marine growth. 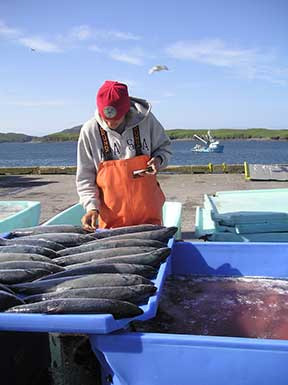 Sampling sockeye salmon at a processing plant in Alitak 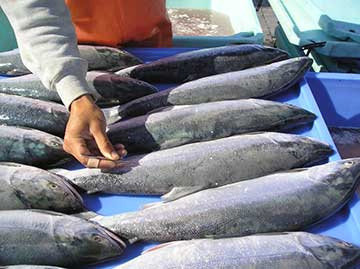 Removing a scale from a sockeye salmon. 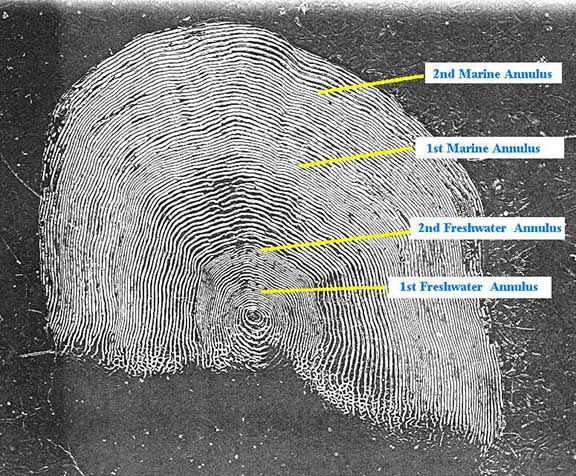 This scale, which is of a Spiridon Lake sockeye salmon, exhibits two freshwater annuli and two marine annuli. The total age is 5, including an additional year representing the time between egg deposition and fry emergence.