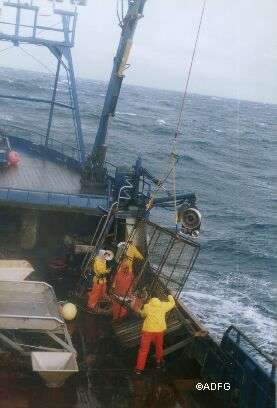 The 1998 St Matthew Island blue king crab Paralithodes platypus pot survey was funded under the State of Alaska's Bering Sea crab test fishery program and is the Alaska Department of Fish and Game's (ADF&G) second survey effort in this relatively small, high-value fishery. National Marine Fisheries Service (NMFS) has conducted annual trawl surveys in this area since 1978. The NMFS estimates of juvenile and female blue king crab abundance are usually very imprecise due to the preference of such crab for rocky habitat which can not be sampled by trawls. ADF&G implemented it's first survey and large-scale tagging study in 1995. The 1998 ADF&G survey contained 95 of the same stations that were surveyed in 1995. Nearshore stations (20 fathoms or less) were also fished at the end of the 1998 survey. Fishing styles and pot types varied from offshore to nearshore work so crab numbers are not equitable but some interesting differences were apparent in the two study areas. 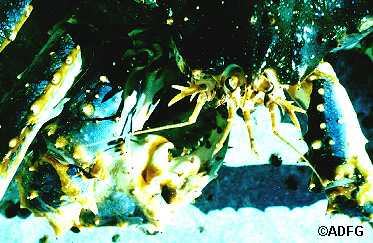 The primary purpose of the nearshore study was to look for egg bearing females. The offshore study was primarily a tagging survey to estimate abundance of legal and sublegal male blue king crab. During the survey a total of 5,622 male blue king crab were tagged. Of the tagged crab 3,627 were legal and 1,995 were sublegal. During the 1998 St. Matthew commercial fishery 592 tags were recovered. ADF&G will be returning to St. Matthew Island to do a 10 day nearshore study again in the summer of 1999.