Along the continental slope of the eastern Bering Sea, two species of Careproctus snailfishes deposit eggs within the branchial chambers of the commercially important golden king crabs (Lithodes aequispina). The presence of the egg masses results in gill compression, localized death of gill tissue and, in extreme cases, total loss of gill tissue on one side of the body. The presence of eggs and larvae increases the mortality of commercial crabs within the holds of fishing vessels by 35 percent. This research reports on this snailfish-crab association, how the Careproctus snailfish choose their host crabs, and the consequences to the crabs. 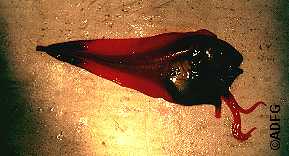 Red Snailfish showing the ovipositors that exude eggs into the branchial chambers of large lithoid crabs.

Liparid snailfish in the genus Careproctus extrude eggs through an anteriorly positioned ovipositor into the branchial chambers of large lithodid crabs. This relationship was first described for C. sinesis and Paralithodes camtschatica in the northwest Pacific. Subsequent studies have shown that additional species both within Paralithodes as well as three other lithodid genera also serve as hosts to various Careproctus species. 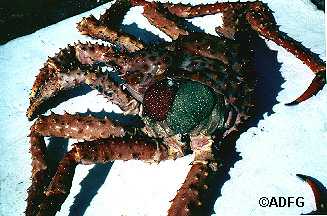 Golden king crab with a section of the carapace removed showing snailfish eggs in the branchial chamber.

The advantages snailfish gain by placing their eggs within an enclosed, constantly aerated space are easily recognized---embryos and larvae are provided with a well aerated environment and protection from predators by the branchial chambers of the crab. The disadvantages to the crab are important to know because most of the infected crab species support commercial fisheries. Recent cooperative research between NMFS and ADF&G on golden king crabs has given us some interesting insight into the characteristics of this snailfish-crab association and into the consequences of this association to the crab.

Snailfish seem to lay eggs within the branchial chambers of recently molted golden king crabs, and the number of egg masses found within these infected crabs increases with carapace length. The presence of these egg masses within the branchial chamber of golden king crabs has been associated with three distinct pathological conditions of the gills. First, egg masses compress gills so strongly that a distinct impression of the egg mass is left on the gill surface. Second, gills on the infected side are often darker in color than those on the opposing side. Third, gills on the infected side often have areas of blackened, necrotic tissue.

The damage to the gills from the presence of egg masses may result from two causes. First, gill compression could be strong enough to restrict blood flow resulting in localized necrosis. Second, egg masses could interfere with the functioning of the fifth periopod, which is covered with setae and functions as a gill cleaning appendage. Gill damage influences a crab's respiration and its ion exchange. These are two factors that might explain the 35% higher mortality of infected male golden king crabs compared to uninfected crabs within the live tanks of commercial vessel.