"Ghost Fishing" has been defined as the ability of fishing gear to continue fishing after all control of that gear is lost by the fisherman. Aesthetics, entanglement, and ghost fishing are the primary concerns relating to this derelict gear. Our research examines ghost fishing by lost crab or cod pots in specific areas off the northeast shore of Kodiak Island, Alaska. Data was collected from 3 different surveys by the Alaska Department of Fish and Game and the National Marine Fisheries Service during 1995 and 1996. 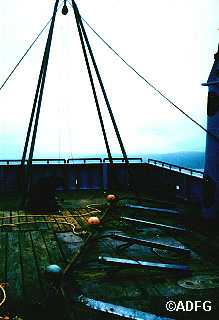 Grappling device used during the study.

A special grappling device was constructed for this project. It was designed to hook the floating line of the pots or perhaps the pot frame itself. When pots were pulled aboard the research vessel basic descriptive statistics were used to characterize the pots and their contents. The number of pots by category (rectangular, pyramid, or conical) were counted as well as the proportion with bait jars, tears, and biodegradable mesh. The mean and median number and size of crab per pot was calculated for the various species of crabs found in the recovered pots. Records of abundance, size, and percent occurrence for other commercially important species were kept as well as counts for all species. 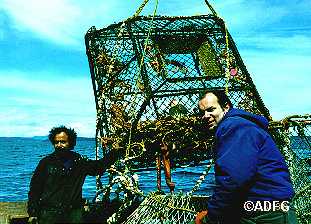