The purpose of this research was to develop an electronic crab identification system which would differentiate among the morphologically similar Tanner (Chionoecetes bairdi), snow (C. opilio), and Tanner x snow hybrid crabs. Work is now being done on a groundfish classification system.

ADF&G and the University of Minnesota used a four-phase approach to develop a computer vision-based crab classification system:

ADF&G personnel sampled crabs at the dock during the 1993-95 Bering Sea Tanner and snow crab fisheries. Carapaces and tissues were collected and analyzed at the ADF&G genetics lab in Anchorage. After genetic analysis was done each carapace was then labeled as a Tanner, snow, or hybrid crab. 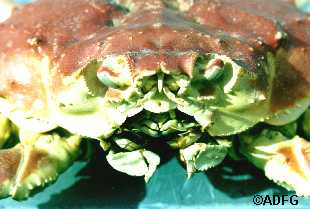 Crab carapaces, along with their genetic identification to species or hybrid, were sent to the University of Minnesota's Computer Science and Engineering labs where image analysis of the carapaces and system training were completed. 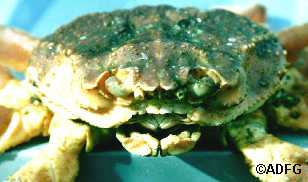 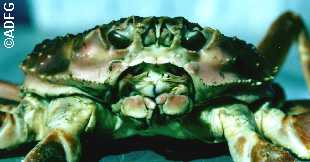 An expert computer vision-based crab classification system was developed that is highly accurate in identifying Tanner, snow, and Tanner x snow hybrids. The system, once launched, automatically takes a picture of the crab carapace and produces its classification decision based on features that it has acquired or measured from images taken by the video camera. Research is ongoing and is moving toward producing a weather-resistant field system which can be used on fishing vessels, and a system that will be able to classify flatfish.

The goal of the fish classification system is to recognize 2 subspecies of rock sole: southern rock sole, Lepidopsetta bilinerata, and northern rock sole, Lepidopsetta perarcata. Recognition of the two rock sole species can be achieved by combining the output of a contour extraction routine with a principal components-based classification approach. This approach may be able to distinguish the two rockfish from video frames and color digital camera images. Up until now the main way to distinguish the 2 rockfish species was via their gill raker count.