The goal of this research was to design a Tanner crab pot that would optimize the retention of legal size male crabs while minimizing the retention of females and sublegal males. According to fishery regulations, fishermen are required to immediately return to the sea undersized male and female Tanner crabs, Chionoecetes bairdi, yet the survivorship of these discarded Tanner crabs remains unknown. This type of handling can have lethal and sublethal effects on crabs which can lower long term fishery yields, thus necessitating the need for crab pots designed to minimize the capture of females and undersized males. This two phase study was conducted in cooperation with NMFS biologists in Chiniak Bay, Kodiak, Alaska, in an 8.3 km2 area encompassing a portion of the Tanner crab population. 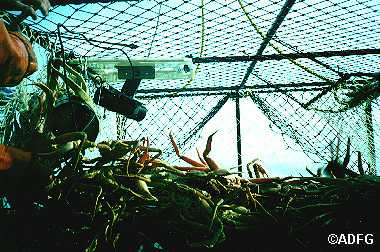 7" escape mesh comprising 1/3 of a vertical plane of a Tanner pot.

During the first phase of the project, four pot types were used: a standard Tanner pot, a Tanner pot with escape mesh, a Tanner pot with four escape rings placed high, and a Tanner pot with four escape rings placed low. These pot types were used to test the hypothesis that the catch and retention rate of sublegal male and female Tanner crabs is greater in pots without escape mechanisms than it is in pots with escape mechanisms. In phase II the pots were configured the same way as in phase I except four more rings were added in an attempt to discern whether more rings would make a difference in the number of sublegal males and females that were retained in the pot. Conclusions on the effectiveness of the competing designs will be reported in a publication following final analysis of these data. 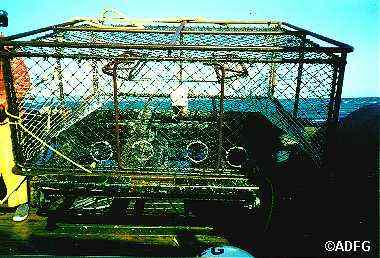 5" escape rings on a vertical plane of a Tanner pot.