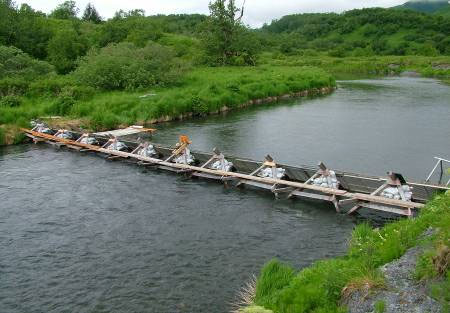 The Saltery River weir is approximately 37 m (120’) long and is located about 0.4 km (one-quarter of a mile) below the outlet of Saltery Lake, on the northeast side of Kodiak Island. Saltery weir was first constructed and installed in 1985. During the first 3 years of operation, it was placed in various locations closer to the lagoon. In 1988, it was moved to its present location due to instability and a shifting river bed and operated there until 2003 and again from 2008 through 2010. In 2010, the Saltery weir was operated by two KRAA employees and supervised by an ADF&G project biologist from early June to early August.