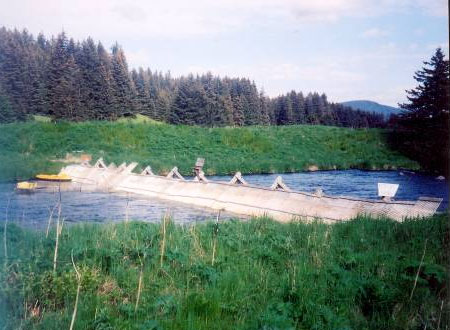 The Litnik (Afognak River) weir is approximately 27 m (88’) long and is located about 0.8 km (0.5 mi) above the outlet of the Afognak River, which flows into Afognak Bay, on the south end of Afognak Island. A weir was first constructed in 1921, at a site located approximately 0.64 km (0.4 mi) below the outlet of Afognak Lake, where intermittent weir counts occurred up to 1978, then annually until 1985. In 1986 it was moved to its current location and has been operated there since. The Litnik weir is operated by two ADF&G Commercial Fisheries Division employees from late May to mid-September.